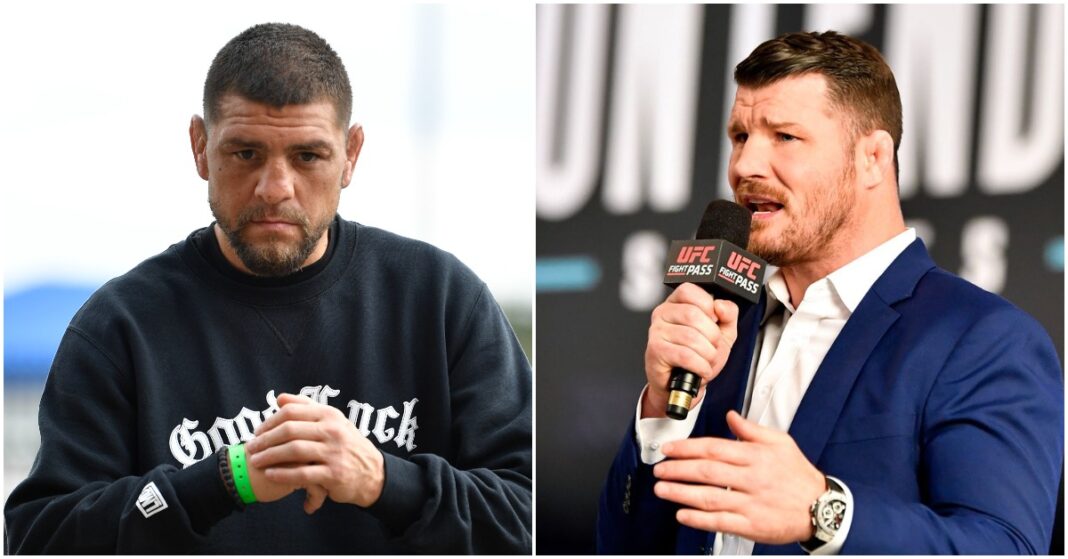 Michael Bisping wants to see Nick Diaz fight again and has suggested that the UFC fan favourite takes on Donald ‘Cowboy’ Cerrone next.

Diaz ended his six-year lay-off from the sport in 2021 when he rematched Robbie Lawler at UFC 266. The Stockton, California native gave a good account of himself before ultimately being TKO’d by ‘Ruthless’ in the third frame.

The 38-year-old has expressed a desire to fight again but UFC president Dana White doesn’t think he should, despite being impressed with his performance at UFC 266.

Former middleweight king, Bisping, is happy to watch Diaz fight again as long as it’s against another veteran of the sport. ‘The Count’ suggested Diaz could face Cerrone next during a recent Q&A session.

Chael Sonnen claimed that Cerrone was interested in a fight with UFC newcomer, Pimblett, but the brash scouser has since ruled out fighting ‘Cowboy’ next.

“It’s going around everywhere, but there’s no truth to it,” Pimblett told Bisping about rumours he’ll fight Cerrone next. “Nothing on my end. Do you really think that the UFC are gonna put me on a card on the 5th of March in Vegas when they’re doing London on the 19th? It doesn’t make sense. I think that was just Chael having a little go for some clickbait or something. It started with Chael.”

Now that the former Cage Warriors champion is out of the equation, nothing is standing in the way of Nick Diaz vs. Donald ‘Cowboy’ Cerrone.

Both men are clearly past their best and are riding long losing streaks but despite that, they clearly have something to offer.

Why not make some money by booking a fight the fans will surely love?

Do you agree with Michael Bisping? Is Nick Diaz vs. Donald Cerrone the fight to make?