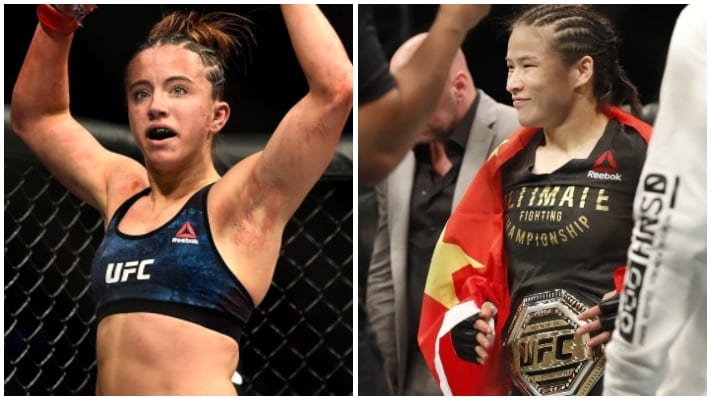 UFC women’s flyweight prospect Maycee Barber believes she has what it takes to not only defeat Weili Zhang, but dominate her.

Zhang became the new women’s strawweight champion following an impressive first-round TKO victory over Jessica Andrade back in August. “Magnum” currently holds a 20-1 record and hasn’t suffered defeat since her pro debut back in 2013.

But Barber — who takes on Gillian Robertson at UFC Boston this Friday — believes she is more than equipped to outclass the Chinese champion:

“Right away? I’d move back down to 115 and take that one first,” she said at a recent media scrum when asked which title fight she would hypothetically take. “Only because I really believe that’s the one that right now I could go in and just dominate that fight.

There’s no denying that Barber is confident. After all, she’s still only 21 and already holds two UFC victories via TKO as well as a 7-0 record.

Aptly nicknamed “The Future”, Barber also has plans on breaking Jon Jones‘ record for being the youngest UFC champion of all time.

However, if Barber wants to achieve all her goals, she’ll have to make sure she gets the job done against Robertson on Friday.

What do you make of Barber’s comments? Do you think she could beat Zhang?