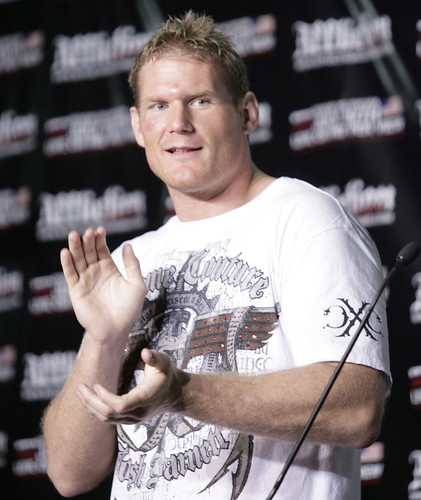 Over the weekend Strikeforce announced that the Strikeforce Heavyweight World Grand Prix final between Josh Barnett and Daniel Cormier would take place on May 19.  Today, a second hurdle was cleared when Josh Barnett was issued a license to compete in the state of California.

The hearing itself was rather lengthy and interesting for the fact that Barnett, perhaps unexpectedly, said about his positive test in 2009, “I can’t speak on the test itself, what I can say is I didn’t knowingly or intentionally ingest steroids. I did not take steroids. I do not know how a steroid got into my system. There could be a potential of a tainted supplement, there could be a potential of the machines perhaps not being cleaned in between usage, there’s a myriad of factors that could go into this, but I know for one, I did not take steroids.” – for more see MMAWeekly

Barnett did have restrictions imposed on him for his license, requiring him to undergo random testing prior to fighting in California.

After finding out that Barnett was licensed, Cormier tweeted, “Yes!!!!!! @JoshLBarnett got licence We are fighting in Cali. San Jose I need u guys to come out in huge numbers. We can and will do this. DC”