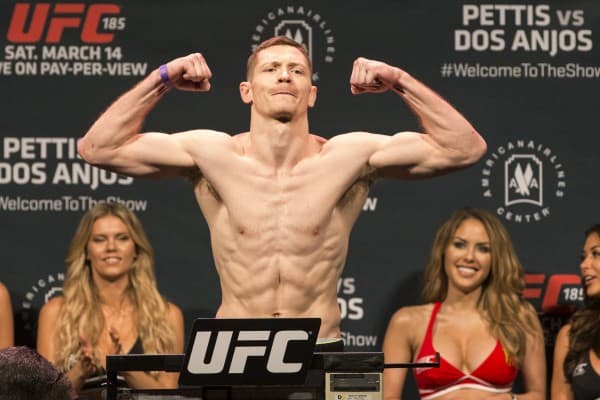 Heading into his potentially explosive main event against Dustin Poirier at this Saturday’s (October 24, 2015) UFC Fight Night 76 airing live on Fight Pass from the 3Arena in his native Dublin, Ireland, lightweight ‘Irish’ Joe Duffy is in awe of the fact that he’s headlining an event after only two UFC wins that ended in the first round.

The quickly rising lightweight most recently took out Ivan Jorge with a picture-perfect triangle at June’s UFC Fight Night 72 from Glasgow, Scotland, after he finished Jake Lindsey via TKO in his UFC debut at March’s UFC 185.

Duffy told MMAjunkie.com that he expected to get a spot in a co-main event fight, but when a event slot opened up in Dublin, he knew he was the obvious to headline the card with Ireland’s favorite son Conor McGregor already booked to face Jose Aldo in Las Vegas on December 12:

Known best for being the last fighter to defeat McGregor, Duffy will now look to make a big name for himself by carrying the full weight of the Irish nation on his shoulders as he headlines what is essentially his own card that sold out in a record-setting one minute. Yet if you ask ‘Irish’ Joe, he doesn’t feel any pressure as he maintains his usual calm focus on the task at hand:

“I don’t feel any pressure whatsoever,” Duffy said. “With the fight, being the main event – none of that gets to me and I don’t look too much into it. Really, it’s just an idea that people put in their head. It doesn’t change anything. I’m still going to go out there and fight the same fight I’ve been training for. None of these factors play a part.

“I’ve trained for a five-round fight before and cardio was never an issue. It’s the same this time. I feel there’s little adjustments, when you’re in this position you step things up slightly, but I’m relaxed and things will go well.”

Duffy knows a big fight could be up next for him in the stacked UFC lightweight landscape if he can get past Poirier, a crafty and dangerous veteran who has a two-fight win streak of his own working at 155 pounds. Due to ‘The Diamond’s’ experience, Duffy knows this fight may last longer than his previous two UFC bouts; something that’s he’s fully ready for:

“A win over Dustin puts me right up in the mix and I’ll be ready to fight the top 10 guys, the elite guys,” Duffy said. “I think this fight might go longer (than my first two UFC fights); I’m fighting a top-level guy and I’m prepared for five rounds. That’s what I’m ready for, but if he gives me the opportunity to finish the fight quickly I will take it.”

Defeating Poirier would certainly put him right on the list of contenders, and of course there’s also a rematch with McGregor, who’s recently teased a move up to 155 pounds after he wins the unified featherweight belt.

Duffy not surprisingly thinks that he would take down ‘The Notorious’ again, so if he gets past ‘The Diamond’ this weekend, a world of possibilities would suddenly open up for Duffy. Will he prove he’s truly the real deal in Dublin?