Huge news for the UFC Light Heavyweight division has emerged today, as we learn that Glover Teixeira will get the next shot at Jon Jones. Many of us, Dana White included, were excited about and wanted a rematch between Jones and Alexander Gustafsson. 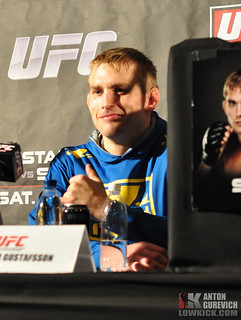 The two put on a FOTN, and possibly FOTY performance at UFC 165, that was very close fought. Gus had Jones hurt early, cutting the dominant champion and was unlucky (some might say) not to get the nod from the judges.

The news comes as a shock to some fans, but I bet it’s music to a certain Brazilian slugger’s ears. Gustafsson will likely be very disappointed with the news, especially considering it was Jones’ choice. Check out what Dana White said to ESPN.com on Wednesday:

“That’s what the champ wants,” White said. “We’ll probably have that fight on the Super Bowl card in New Jersey.”

DW also hinted that Gus would be in action around the same time in his home country of Sweden. Bones has been known to turn down fights before, but one of the (possibly) biggest matches of all time?

I smell chicken and it’s not fried. Jones, in my opinion, needs to rematch Gus; if only to prove that he is the very best in the division. UFC 165 didn’t do that for me, it showed that Gus is the man to beat him and Jones needs to come back stronger with a finish if he really wants to own the division.

I might be wrong, but it looks like Jones took a nasty beating and wants no more of The Mauler. I’ll keep you updated as more news comes in.