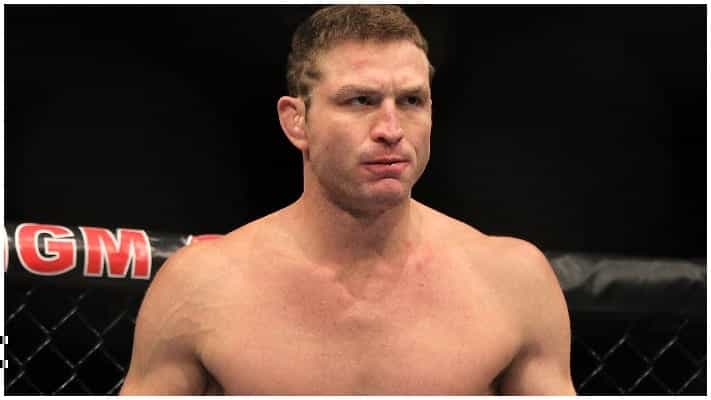 Jason Miller pleaded guilty to vandalism on Tuesday and was immediately sentenced to 364 days in jail.

The former UFC fighter has been in custody since being charged with residential burglary and car theft on August 21. At the time of his arrest, the 40-year-old was on probation for a domestic violence incident.

‘Mayhem’ was originally charged with one felony count each of first-degree burglary, unlawful taking of a vehicle, and grand theft auto. According to court records obtained by CBS Los Angeles, the felony count of attempted grand theft was thrown out as part of his Miller’s plea deal.

After a string of legal issues over the years, Miller finally got some jail time in 2019 after pleading guilty to a felony count of vandalism and a misdemeanor count of violating a protective stay-away order according to court records found by The Orange County Register.

Miller was arrested in October 2018 after vandalizing his one-time girlfriend’s La Habra residence. In the process, he also violated a stay-away order. In a similar circumstance, he was immediately remanded to police custody and sentenced to one-year imprisonment.

The popular middleweight who also used to compete for Strikeforce, hasn’t fought in mixed martial arts (MMA) since 2016 when he was submitted by Mattia Schiavolin at Venator FC3.

Miller has only fought three times in total since 2011 and had lost his previous two fights in the UFC as well to Michael Bisping and C.B. Dolloway.

Do you think Jason Miller will be able to bounce back from his latest run-in with law enforcement?