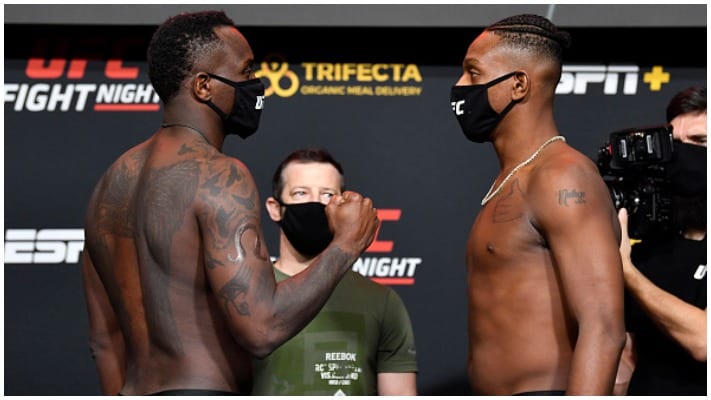 In the UFC Vegas 16 co-main event we have something of a crossroads fight. A long-time contender at 205lbs Ovince St Preux takes on undefeated prospect Jamahal Hill who will look to add a big name to his perfect record. Who’ll win? Let’s find out…

Round 1: Ovince St Preux is trying to implement his kicking game early but is not having much success. Jamahal Hill is looking to time the veteran as he comes in and is throwing heavy punches. OSP takes a kick to the cup but fights on. Hill backs OSP to the fence and fires off a one-two – the cleanest strikes of the fight. Another clash sends St Preux tumbling across the Octagon. He seems fine and Hill is taking his time right now. OSP lands a nice body kick. Another kick goes low on Hill who makes a small complaint before fighting on. St Preux rattles off two low kicks. Both of them get a big reaction for Hill who is knocked off balance. As we enter the final minute of round one OSP is really starting to enjoy some success with his low leg kicks. They clinch up in the middle before Hill pushes the fight against the fence. OSP threatens with a choke to force the separation and both men swing to the finish in round one.

Round 2: Hill is aggressive at the start of round two but it is OSP who lands the first significant strikes of round two. Both men go to the body before Hill lands upstairs. Hill loses his gumshield, we have a very brief break in the action. Back underway and Hill lands a big bomb over the top. He’s got OSP up against the fence and is following up with vicious punches. St Preux manages to clinch up. Hill quickly jumps on him again. He’s going all out for the finish and gets it in emphatic fashion.