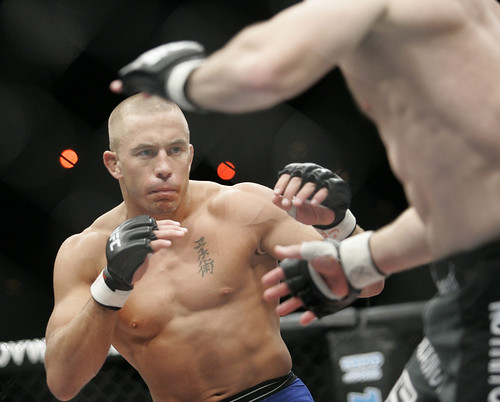 The one thing that UFC Welterweight Champion Georges St. Pierre seemed to want more than anything else on Saturday night was to see Nick Diaz stand in the center of the Octagon with his hand raised in victory. In the days leading up to the event, St. Pierre made it clear that he wanted to face Diaz in his next bout, however that opportunity was denied him by a Carlos Condit victory.

There were many fans that also wanted to see St. Pierre meet Diaz and while that fight may not happen as soon as St. Pierre would have liked, it is still a possibility as St. Pierre tweeted that he would still like to face Diaz, “I still hope to meet Nick Diaz in the Octagon one day.”

At this point St. Pierre is rehabbing from knee surgery and Diaz exists in limbo, with the question of whether or not he “really” retired hanging in the air following Saturday’s announcement that he didn’t “need this s—.”

When St. Pierre returns his most likely opponent will be Condit, barring a title defense and loss by Condit. With that in mind it could be quite some time before St. Pierre and Diaz could ever meet.

What do you think LowKick’ers, will this fight ever come to fruition and will it be worth the wait?