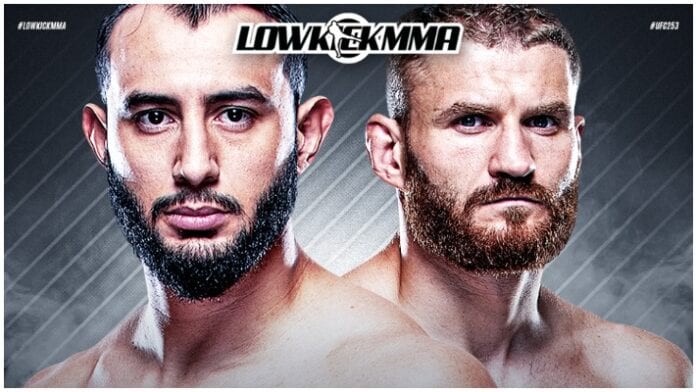 In the UFC 253 co-main event the vacant light-heavyweight title is up for grabs. Dominick Reyes and Jan Blachowicz are set to throw down for the belt recently vacated by long-time 205lb king Jon Jones. Who will be crowned the new champion? Let’s see what the LowKickMMA staff think will happen.

Jordan Ellis: This is a really tough fight to call. Dominick Reyes looked great against Jon Jones but besides that valiant defeat he doesn’t have many high-profile wins to brag about. Earlier this week I backed him to get the win, just because he clearly has great potential. As the week has progressed my mind has shifted towards Jan Blachowicz. He has a much more impressive record that is littered with high-profile wins. At 38 years old this will probably be his one and only shot at UFC gold. So I think he will be determined to make the most of it. For that reason, I’ve changed my mind and am now backing Blachowicz to score the win in this 50/50 fight.

Ryan MacCarthy: You could for sure make the argument for either Reyes or Blachowicz. They’re both on a hot streak. Reyes has only lost to Jones. Jan is building some momentum with a 3 fight win streak but a lot of people think Reyes is the uncrowned champ — and he probably believes that, too. Reyes is likely riding high off what he believes was a win versus Jones and he has a chip on his shoulder. I think Jan is for sure a live dog tonight, but I just cant get over how good Reyes looked against Jones. I see Reyes taking this by decision.

Abhinav Kini: Both Reyes and Blachowicz have knockout power and given that they prefer to strike, I can see this fight ending in the first two to three rounds. However, Reyes has the height and reach advantage and I believe he’s the more well-rounded fighter so I see him getting the finish.

Karim Nathan: In the fight for the vacant belt I think Reyes will come out strong like he did against Jones and pressure Jan from the start landing some clean punches on him and might even drop him early on in round 1, Jan might land but it won’t be enough to stop Reyes. Ultimately, I think Reyes’s pressure is gonna be too much and he’s going to stop Jan in the second round.

Harry O’Connor: For Jan v Reyes I think this is going to be a much closer fight. I think if we’re looking at skill set, Reyes is a lot better, to mix it up with Jon Jones and come out of a fight with a lot of people feeling you won, speaks for itself. We know that Jan has KO power but I think Reyes will finally claim what he feels is rightly his tomorrow, I’m going to go with Reyes winning on points 4 rounds to 1.