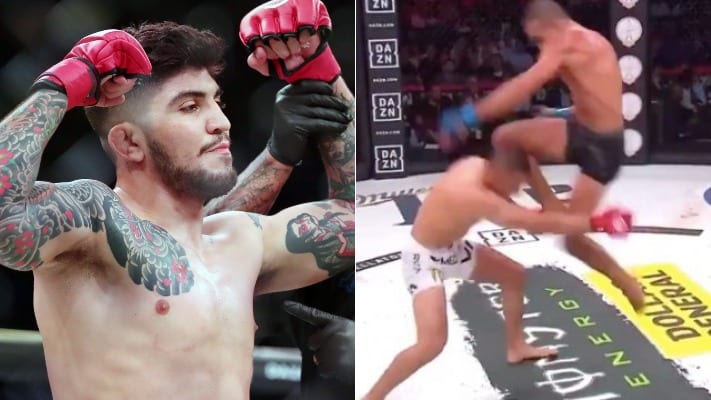 Dillon Danis has some words of advice for Aaron Pico following his knockout loss at Bellator 222.

Pico was rendered unconscious by Ádám Borics in New York this past weekend (Fri. June 14, 2019) in the second round of their featherweight meeting. The defeat marked the second knockout loss in a row for the 22-year-old. Pico was being hyped as one of the brightest prospects in the sport upon making his mixed martial arts (MMA) debut in 2017.

However, he has since suffered three defeats in seven fights, all losses coming by way of finish. Speaking on “The Ariel Helwani MMA Show” yesterday (Mon. June 17, 2019), Bellator star Dillon Danis offered some sincere words of advice to Pico:

“For Pico, I feel bad for him because he’s young. He’s 22 – 21? He’s been knocked out a couple of times now. That’s the thing you have to worry about besides him losing. You shouldn’t be getting knocked out like multiple times at a young age. Think about it, he’ll probably be fighting for 10-15 more years.

“And, it’s scary to see with CTE and stuff like that. I think maybe he needs to calm it down and take time in between fights. Obviously, I’m not his coach or a doctor or anything, but that’s the one thing I would be worried about. He’s so young. He’s probably getting crazy sparring in the gym. He looks like the kind of guy who goes really hard in the gym.

“He’s taking a lot of damage to his brain, he needs to realize he’s probably going to be fighting for another 10 or 15 more years. It’s not – he just got knocked out in his last fight and he just came back right away – in less than a year or so. I think that’s one thing he needs to think about, because he’s so good, you know?”

Danis himself also competed at Bellator 222 Friday night. He defeated Max Humphrey via first-round submission by way of an armbar. Danis is now 2-0 in his professional MMA career, but unfortunately suffered a torn LCL prior to the bout. He’ll likely be out-of-action until the end of the year, where the jiu-jitsu ace hopes to fight at least twice more before 2019 comes to an end.