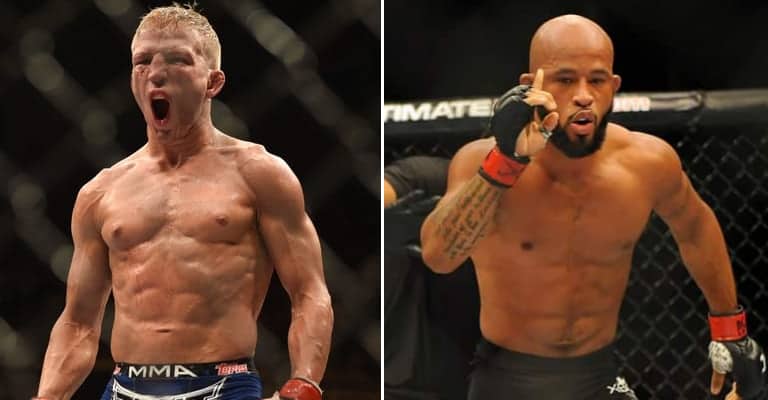 While “Mighty Mouse” has been less than receptive to it, Dillashaw has ramped up the trash talk after once again becoming a UFC champion by stopping arch rival Cody Garbrandt the November 4’s UFC 217.

Dillashaw discussed why he thinks it’s the only fight for “Mighty Mouse” to take during an interview on The MMA Hour on Monday.

“Why not? This fight makes sense. He doesn’t have anybody and this thing should’ve happened in August. He wants a big money fight. He wants to prove that he’s the pound-for-pound king.

“This is the step. I can make the weight. I wanted to stop him from breaking the record and he wanted to break it first, so he got that out of the way, he got to do what he wanted to do and he beat the record books.

“But now it’s time to man up and get this fight going. This is a fight that fans want to see. I keep hearing them say it and everyone’s loving it, so let’s get this done. There’s no reason to be scared now, you got to break the record.”

As for the bantamweight division, Dillashaw doesn’t see a rematch with Garbrandt or Dominick Cruz anytime soon, especially considering the way in which Garbrandt was dispatched by the current champ at UFC 217 and how Cruz refused to grant Dillashaw a rematch after winning the belt in a controversial split decisions UFC Fight Night 81.

Dillashaw has remained adamant before and after winning the bantamweight belt, which has surely given him an advantage in seeking a superfight with the UFC’s most dominant champion:

And as for his old nemesis Cruz, Dillashaw was clear that he wasn’t interested in the match up as Cruz had already denied him a rematch:

“Cruz can suck it, man,” Dillashaw said. “He’s the one who made me wait forever. He knew he should’ve given me that rematch. He was scared. He thought he was cherry-picking by picking Cody. He was trying to hold onto that belt, get as much as he could. So if it’s up to me, he can wait. He can wait as long as I did. I couldn’t care less. I mean, I do want to beat that guy. I do want to smash because I know that I can, but I don’t care what he says. I’m going for the fight that makes the most sense for me right now, and that’s Demetrious Johnson, and I’ll do whatever it takes to get it.”

Do you want to see Dillashaw challenge for the flyweight belt? Or should the new champion focus solely on his own division?