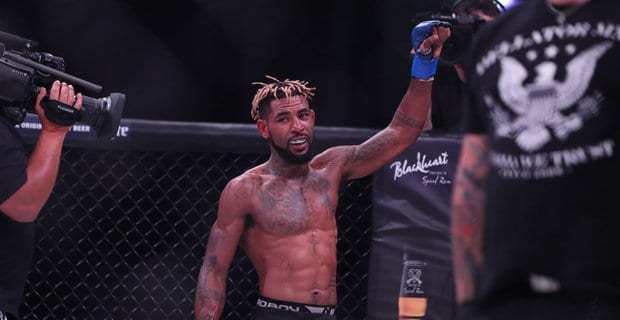 McKee said he underwent surgery in January after tearing his knee in the Derek Campos fight. Yet, for Caldwell, he doesn’t understand how McKee is healthy all of the sudden and calls it fake news.

“Not at all,” Caldwell told MMA Junkie following the Bellator 2020 showcase press conference. “I feel like A.J.’s a slick dude, and he’s trying to sandbag it and take me off my game. But I will be ready June 6 to put hands on you, and elbows and knees. I don’t think that injury is any bit real at all. Fake news.”

Entering this fight, Darrion Caldwell is confident he’ll get his hand raised as he doesn’t know where McKee can beat him. He suspects the undefeated contender will try to knock him out but says that it’s easier said than done.

“In all honesty, what’s his gameplan?” Caldwell asked. “To knock me out, he said? I think that’s a tough task to accomplish as I don’t really get hit, you know? It’s not something [where] I go in there and just take punches and take damage. So I think he’s going to run into a situation where he’s looking for one thing, and he’s not going to get it.”

In this fight, Darrion Caldwell also believes that McKee won’t be able to deal with his athleticism.

“He ain’t faced color. He ain’t faced me,” he said. “I’ve seen him when he fought somebody athletic. He’s just not the same. He’s going to go in there and beat up all the white boys, then when he fights somebody real, like he’s about to, it’s a different story. That’s ultimately what it boils down to. I’m a different beast, and that’s going to show on June 6.”

In the end, Caldwell is confident he will hand McKee his first pro loss and then will go on to win the featherweight grand prix to become Bellator‘s featherweight champion.

Do you think Darrion Caldwell will beat A.J. McKee?