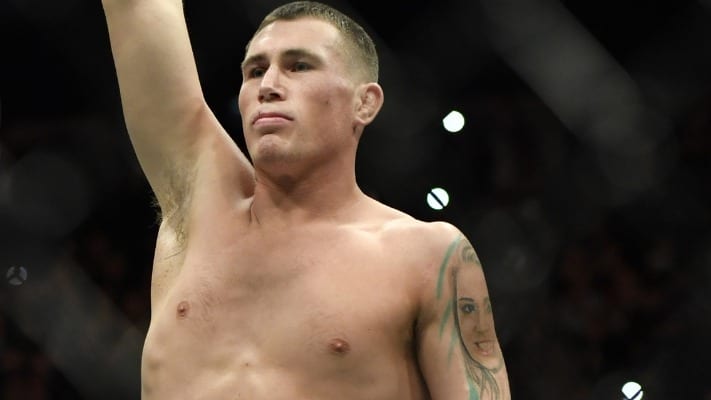 Former UFC welterweight title challenger Darren Till is still undecided on which weight class he’ll be competing in next.

Till is coming off two losses — both of which were finishes — and the general opinion from mixed martial arts fans is that he should move up to middleweight to avoid the drastic weight cut.

Till has teased the move multiple times before, but when asked which weight class he would be competing in next, he responded:

“Nope, I have not [decided which weight class],” he said on Ariel Helwani’s MMA Show on Monday. “I’m just focusing on getting better and being better. That’s the only thing, really. I haven’t got a fight yet, I haven’t got anything in mind. I think the goal right now, is to get better and evolve. I’m still only young in this sport and that’s my real goal right now.”

That said, it’s not like Till hasn’t been offered a fight. In fact, he was even offered a main event spot opposite Mike Perry for a proposed UFC Manchester event. However, it never came to fruition.

“It was just a few months ago and the UFC wants to make a main event in England,” Till revealed. “…They offered [Mike] Perry and they want to make a main event in Manchester and it was going to be this big thing and then it never came off and obviously, Perry had that amazing fight on Saturday, and that was that. That was the only thing what was talked with the UFC since my last fight, the loss to [Jorge] Masvidal.”

If Till is offered a fight now, though, he is more than likely to accept:

“As I said, if they ask me to fight right now in three weeks, I’m ready, more than ready. I’m fit and I’m strong. As I said, everyday is a new day, I’m getting better,” he added.

Would you have liked to have seen Till vs. Perry? Which weight class do you think he’ll compete in next?