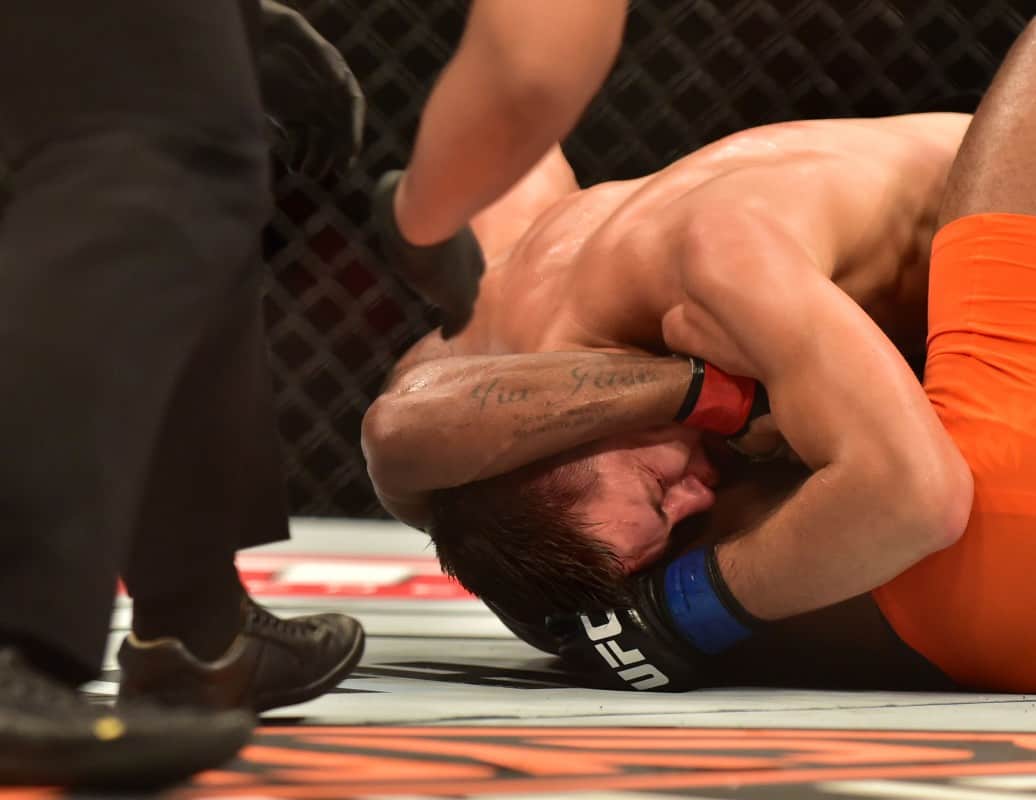 UFC lightweight Drew Dober was unfortunately on the wrong end of an extremely controversial call when he was declared unconscious by referee Eduardo Herdy as his opponent Leandro Silva had him in an almost impossible-to-finish guillotine choke from half guard on the prelims of last night’s (Sat., March 21, 2015) UFC Fight Night 62 from Macaranazinho Gymnasium in Rio de Janeiro, Brazil.

Take a look at the video of the phantom ‘tapout’ right here:

After the call, which handed Dober an undeserving loss, UFC President Dana White immediately took to Twitter to voice his opinion that Herdy, who is supposedly a black belt in Brazilian Jiu-jitsu, should never ref another MMA fight:

Now there is a guy who should NEVER ref again!!!!

Staying on the subject in an interview with FOX Sports 1, White deemed the lapse in judgment “one of the biggest referee screw-ups of all-time.” He moved on to elaborate his beliefs further at the event’s post-fight presser, noting that the fight result should certainly be changed to a no contest.

“Everybody in this room and everybody on this planet knows that was bullshit. Hopefully that can be overturned into a no-contest and we do it fair.”

In his spot with FS1, White wasn’t all that optimistic that Brazil’s MMA regulatory commission CABMMA would actually come through and do what’s right.

“[It’s] probably gonna be tough to do, because these athletic commissions, they protect their own. They’ll back up their refs. But this one is so blatant, so bad, I just don’t see how you don’t overturn this and make this a no contest.”

Faced with the heartbreak of what could have been, Dober spoke up with an emotional stance in his post-fight interview with Kenny Florian.

“You train,” Dober said. “You put your heart, your soul, you bleed, you cry, and the referee stops the fight for no reason. He said that I needed to tap three times, and I did not tap once.”

For his part, Silva not surprisingly agreed with the decision, offering the opinion that Dober had passed out.

White wasn’t buying it, however. While he wouldn’t take anything away from Siva’s victory, he maintained his hard-nosed stance on the controversy.

“Nothing against the kid who won. He didn’t make the call. He’s happy. But that was bullshit and it needs to be fixed.”

It’s painfully obvious that Dober was not only far from submitting, but also advancing to a potentially beneficial position that could have given him the upper hand in the fight. Will CABMMA do what is right and overturn the result, or will Silva’s suspicious submission somehow stand?