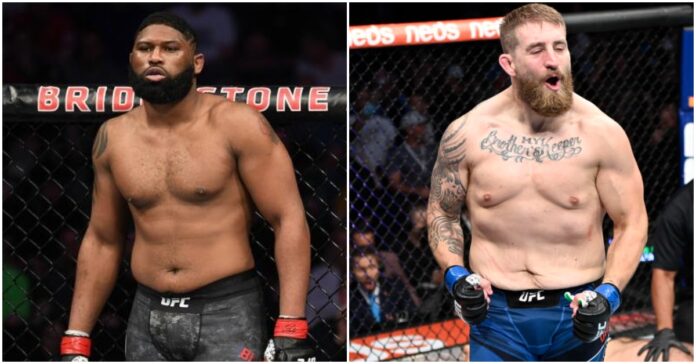 UFC Columbus has itself a new main event and it’s Curtis Blaydes vs Chris Daukaus in a heavyweight showdown.

Former UFC light heavyweight champ Jan Blachowicz had to pull out of his fight with Alexander Rakic, a fight that was supposed to be the March 26 headliner. The UFC is now putting Blaydes vs Daukaus as the new main event for that card.

Initial reports of this move came from Ariel Helwani with mmajunkie.com confirming the booking later in the week. The UFC has yet to officially announce this fight as the headliner though.

READ MORE:  Jeremy Stephens compares himself to real-life serial killers: "I’ve got that thirst, those urges. Like a Dahmer, a Bundy."

Blaydes will be looking to get another win to get closer to that elusive title shot. He is coming off a win over Jairzinho Rozenstruik in September via unanimous decision.

This will also be the second time in a row that Chris Daukaus will headline a Fight Night card. The last time he was the main event was back in December against Derrick Lewis. He lost that fight via first round KO but was on a five-fight winning streak before that bout.

UFC Columbus is shaping up nicely after the announcement of this main event. Other notable bouts scheduled for this card include Amanda Ribas vs Michelle Waterson, Max Griffin vs Neil Magny, and Askar Askarov vs Kai Kara-France.

Who do you think comes away with a win in the main event of UFC Columbus? Curtis Blaydes or Chris Daukaus?