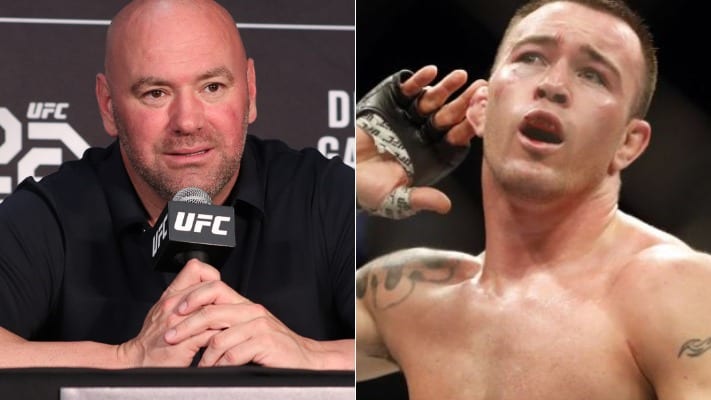 It sounds like Colby Covington’s relationship with UFC President Dana White has never been better.

Speaking on “Submission Radio” recently, “Chaos” discussed his upcoming UFC Newark main event with Robbie Lawler. When discussing how the fight came together, Covington claimed he and White are “best buddies” now:

“I’m here to entertain the fans. That’s what it’s all about. That’s why I’m the people’s champ. It (The Robbie Lawler fight) got put together yesterday. I’m a man of my word. Promises made, promises kept. I told the UFC I’ve been ready to fight for the last year, (ready to) defend my title. So, they called me for August 3rd on a short camp and I didn’t even hesitate. I said, yes sir, no problem sir.

“So, it’s an exciting match-up, man. Robbie’s coming off a dominant win over Ben Ass-cream in his last fight. He’s never looked better. He looks stronger than he ever looked. He’s a great. He’s a great fighter, you know, he’s a fan-friendly fighter, and we’re going to put on a show in Newark, New Jersey on ESPN. Primetime. It’s gonna be big cities and bright lights, baby.”

Many mixed martial arts (MMA) fans were shocked to learn Covington will be taking on Lawler next. He was expected to take on Kamaru Usman in “The Nigerian Nightmare’s” first-ever title defense.

However, it’s sounding like Ben Askren could get the first title shot if he emerges victorious at UFC 239 next month. “”Funky” takes on Jorge Masvidal on what’s looking like the biggest card of the year.