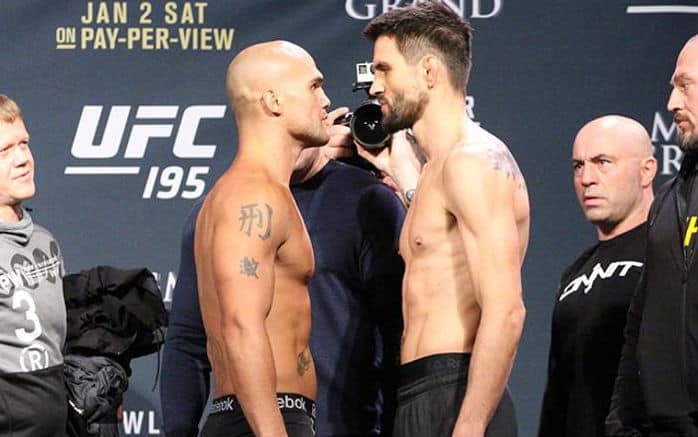 Carlos Condit, who lost to Robbie Lawler at UFC 195 in the main event for the welterweight title, expressed interest in a rematch with Lawler in an appearance on the MMA Hour last week. According to Condit, a rematch with Lawler is the only fight that gets a raise in his pulse. Any other fight for Condit is simply something he is not interested in.

“An immediate rematch with Lawler is about the only fight that raises my pulse,” Condit said recently on the MMA Hour. “That I can get interested in. Those other fights are a little bit more, the rematch with Robbie would be, boom, we’d have a bout agreement in the box real quick and we could get that done.”

Condit teased the possibility of retirement from the sport of MMA following UFC 195. This was something that Condit was talking about going into the fight as well. Now, Condit said that he still loves what he does so he is not giving up on his passion as soon as many thought.

“I still love what I do, I still have a lot of fight left in me,” Condit said. “From a looking long-term, I have to do what is right for my health, for my family, things have been difficult the last couple years, my wife has had some health problems that are fairly major, and, you know, these fights are super stressful. Like I said, I absolutely love what I do. I gotta do what’s right for my family. I’m still weighing my options right now.”

“I just spent six months at least training for that fight, went in there, had a war, I’m not in any rush to do anything right now,” he said.

Lawler has also said in the past that he is willing to give Condit a rematch. However, the UFC has yet to comment on what’s next for Lawler. Is this a fight you want to see? Let us know.