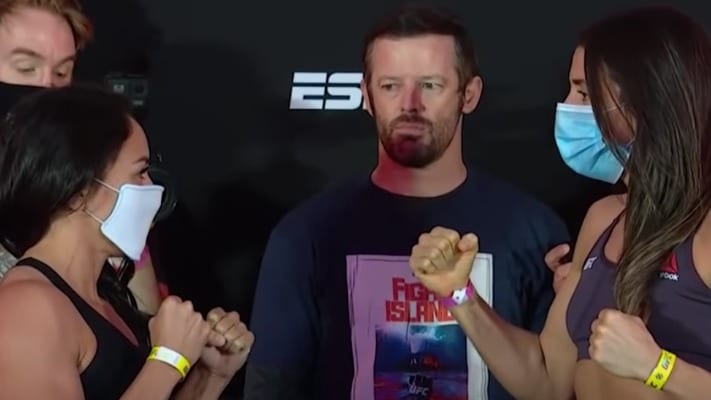 Next up on the UFC Fight Island 3 main card is a women’s strawweight contest between Carla Esparza and Marina Rodriguez.

Round 1: Esparza takes Rodriguez down right away after avoiding some big strikes. There doesn’t seem to be much action but Esparza seems to be bleeding from the top from a strike from Rodriguez. Rodriguez reverses soon after and gets to her feet. Rodriguez looks to land a head kick but it’s blocked. Rodriguez lands a number of strikes before Esparza shoots for a desperate takedown but it’s defended.

Round 2: The second round starts and Esparza has some swelling on her left eye. Rodriguez starts to strike but Esparza takes her down again and starts to land sme strikes from the top. Rodriguez reverses with some scrambles as the round ends. Not a lot of action in that round.

Round 3: They start to strike before Esparza momentarily gets Rodriguez on the ground. She lands some big strikes but Rodriguez gets up and separates. Esparza takes her down soon after and controls her for quite some time. Rodriguez eventually gets up but Esparza times a takedown perfectly to end the round on top.