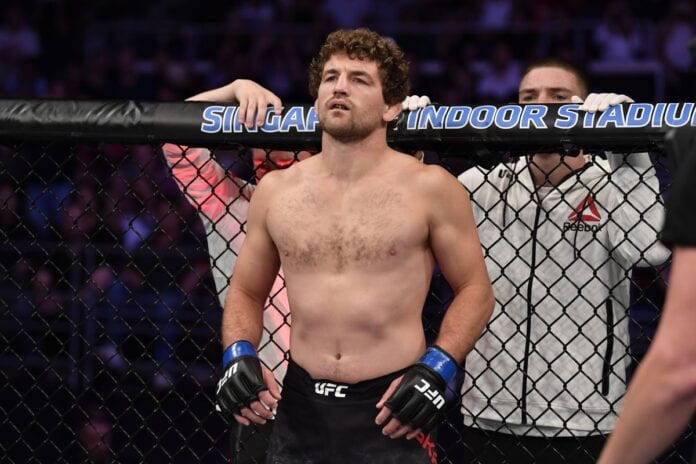 Ben Askren has sent a message to former opponent Jorge Masvidal after his stunning KO loss to Kamaru Usman at UFC 261.

Masvidal was knocked out in the second round of his welterweight title fight with Kamaru Usman after the Nigerian landed a ferocious right hand on ‘Gamebred.’ Now Askren, a former foe of Masvidal has reacted to the KO saying: “I don’t believe in Karma. If you fight long enough shit happens.”

Telling his Twitter followers that he doesn’t believe in Karma, Askren is referencing his own shocking KO which came at the hands of Jorge Masvidal himself when he was knocked out in a UFC-record five seconds when the pair fought at UFC 239.

Ben Askren found himself on the end of another ‘viral KO’ last week when he was knocked out by Youtuber turned professional boxer in the first round of Askren’s professional boxing debut.

It would appear that Askren has turned down the chance to take a bite at Masvidal, especially after Masvidal trained Jake Paul for their fight.

Jorge Masvidal had appeared to be on a resurgence in his career after he knocked out Darren Till, Ben Askren and beat Nate Diaz for the ‘BMF’ title back in 2019.

However Masvidal now finds himself with back to back losses, both coming to the Welterweight Champion, Kamaru Usman however it is the first time Masvidal has been knocked out in the UFC. He is also now 3-4 in his last seven fights.

As for Askren he hasn’t fought in MMA since 2019 after a submission loss to Demian Maia with ‘Funky’ announcing his retirement from mixed martial arts shortly after the loss.

What would you like to see next for Masvidal, should he retire or should he try and rebound from his loss?