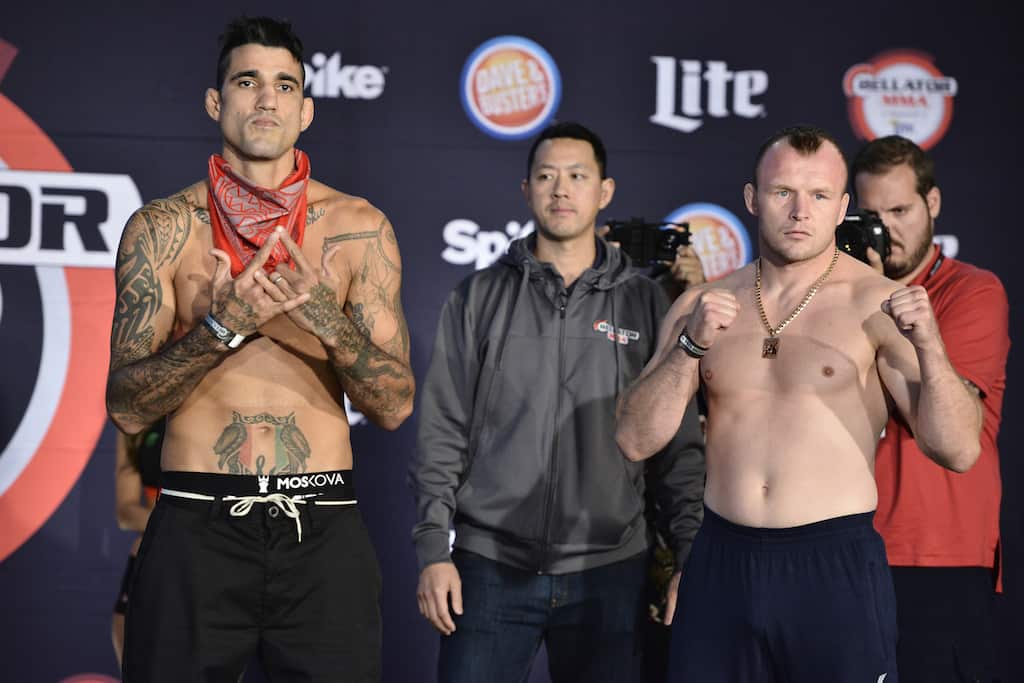 It’s once again fight day here at LowKickMMA, and the talent on display tonight (Friday, October 21st, 2016) will come in the form of Bellator 162. Headlining the card are Alexander Shlemenko and Kendall Grove, but there’s a whole bunch of great fights also taking place on the rest of the main card.

Alexander Shlemenko and Kendall Grove met in a middleweight bout in the main event of Bellator 162. In round 1, Shlemenko clipped him out of the gate with a left hook. Grove caught him with a knee strike to the head and the clinched with him. Shlemenko reversed and pressed him up against the fence. Grove separated from him. Shlemenko dropped him with a left hook but then let Grove back up to his feet. Grove shot in for a takedown but it was stuffed and Shlemenko blitzed him with strikes and knees. Grove started swinging back and stunned Shlemenko. Grove unleashed with knee strikes then clinched with him. In round 2, Shlemenko dropped him with a spinning back kick and finished him on the ground for the win.

Bobby Lashley and Josh Appelt met in a heavyweight bout in the co-main event of Bellator 162. In round 1, after a feeling out process, Lashley caught him with a right hook then clinched with him up against the fence. Lashley worked him over with strikes while in this position. Appelt pressed him off and landed a few strikes. Appelt was accidentally poked in the eye, and Lashley took him down with three minutes to go. Lashley transitioned into half guard and rained down strikes. Lashley then got his back and then full mount and just rained down strikes. Appelt tried to get up, but Lashley dragged him down and went for a keylock but couldn’t get the submission locked in. Lashley continued to land strikes to end the round. In round 2, Appelt rushed him and landed some strikes then went to clinch but Lashley grabbed his neck and took him down. Lashley transitioned into full mount and rained down strikes. Lashley transitioned to back mount and locked in the rear-naked choke for the win.

Goiti Yamauchi and Ryan Couture met in a lightweight bout at Bellator 162. This one did not last long at all. Couture came out aggressive and clinched with him just seconds into the round. Couture pressed him up against the fence and took him down inside a minute of the round. Couture transitioned into guard but Yamauchi locked in an armbar and finished the fight.

Opening the Bellator 162 main card on Spike TV was Hisaki Kato and A.J. Matthews in a middleweight bout. They both came out swinging. Matthews stunned him with a right hand and then continued to land some big strikes. Kato poked him in the eye and the fight was put on pause. The action resumes under two minutes to go. Kato has calmed down and was throwing more strikes. Kato rocked him with an uppercut, landed some more strikes and Matthews fell down to the ground. Kato swarmed him with strikes but Matthews got back to his feet but was in trouble. Kato dropped him with a straight right hand and the fight was stopped.