LowKickMMA.com
Home UFC News Anthony Pettis Warns Khabib: When You Talk About Injuries, They Happen To... 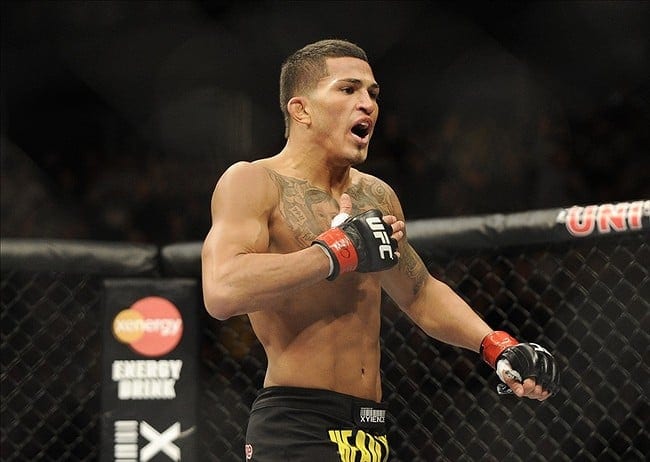 When news broke late last Wednesday night (April 29, 2015) that top-ranked lightweight Khabib Nurmagomedov had been forced out of his long-awaited match-up with Donald Cowboy” Cerrone at May 23’s UFC 187, former 155-pound champion Anthony Pettis took the opportunity to get back at the oft-injured “Eagle.”

“Showtime” had been the brunt of many callouts during his 15-month stay on the sidelines following his title-clinching win over Benson Henderson back in the main event of UFC 164, with the Dagestan wrestler calling Pettis a “paper champion” who was scared to fight him.

But now with two consecutive knee surgeries that began when he was forced out of his first scheduled match-up at UFC 178, Nurmagomedov has been served a large piece of humble pie. Speaking during a recent interview with MMASucka (via Bloody Elbow), Pettis said that you can’t do much about the injuries that happen in the fight game, and Nurmagomedov should have known that:

“He was talking big crap when I was injured, how I was a paper champ and scared to fight people. Injuries happen man and there is nothing you can do about them. He got a little taste of his own medicine.”

Pettis’ tweet that “karma is a bitch” reflected his view of the situation, as he believed the loud “Eagle” should have kept his mouth shut about other fighters that were healing from injuries:

“He probably didn’t wish injuries (to happen to others) but when you talk about injuries and other people when they are hurt, it happens to you. That is why I said it to him.”

Overall Pettis doesn’t wish injuries on Nurmagomedov, but he does think that he should focus more on making himself better and staying healthy rather than blasting every top lightweight at every opportunity. If “The Eagle” truly is one the best, Pettis said that he’ll heal up and show that in the Octagon:

“I don’t wish injury on him. I hope he gets better and if he is one of the best in the lightweight division we should see it coming up in a couple of months. He needs to quiet down a little bit, humble himself and focus on getting better.”