LowKickMMA.com
Home MMA News Anderson Silva vs. Vitor Belfort 2 Is Being Worked On 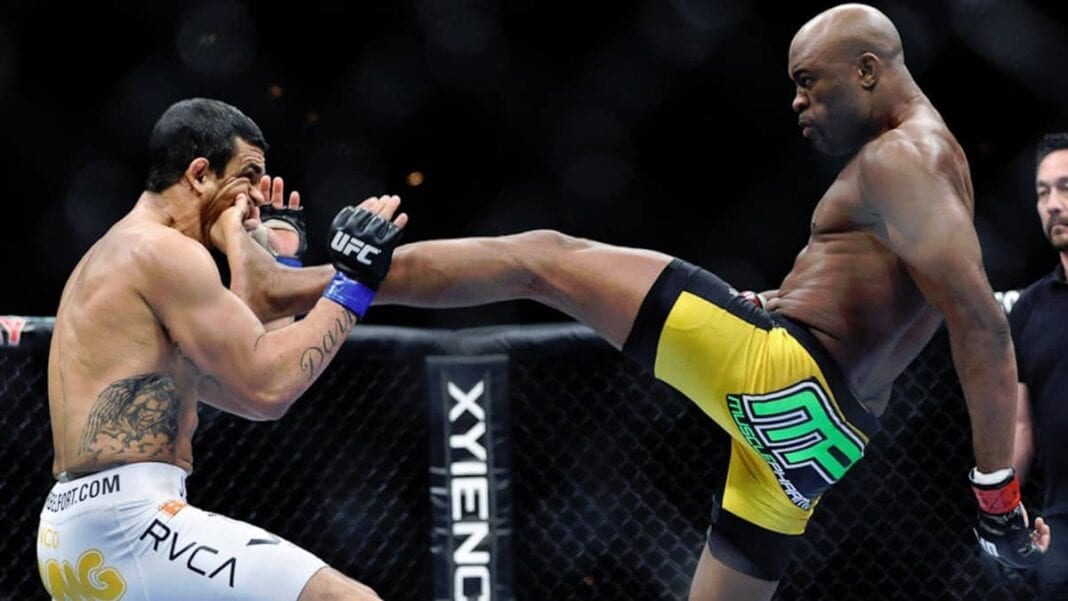 Brazilian legends Anderson “The Spider” Silva and Vitor “The Phenom” Belfort squared off in a massive fight back at UFC 126 which was held on February 5, 2011 in Las Vegas, Nevada.

The result would ultimately be one of the greatest knockouts of all-time as the former long-time middleweight champion in Silva would land a picture perfect front kick on the chin of Belfort, who would instantly drop.

“The Spider” would be shockingly knocked out cold by current champion Chris Weidman at UFC 162 in July 2013, losing the title that he had defended a record 10-straight times. The highly-anticipated rematch would go down just months later at UFC 168, and the result was even more detrimental to Silva, who would gruesomely snap his leg in the second-round.

Many thought that we had seen the end of the road for a man many considered to be the best fighter to ever compete in mixed martial arts. However, Silva would make a miraculous recovery and return just over a year later, scoring a unanimous decision victory over Nick Diaz last Janaury.

The struggles weren’t over just yet, however, as news would break soon after that “The Spider” had tested positive for anabolic steroids. He would eventually be handed a one year suspension from the Nevada State Athletic Commission (NSAC), making him ineligible to compete until January 2016.

As for Belfort, he appeared to be a rejuvenated force in 2013, scoring three-straight head kick knockouts that would result in him being awarded a middleweight title shot.

However, it was clear that “The Phenom” was using testosterone-replacement-therapy (TRT) which was perfectly legal at the time. Belfort looked ripped out of his mind and many accused him of abusing the substance, which is now banned.

After his spectacular 2013, Belfort would soon test positive for elevated levels of testosterone, and would have to miss all of 2014 to wean himself off of TRT.

He returned last May looking like a feeble version of himself, and would essentially be destroyed by Weidman. However, Belfort did recently bounce back with a head kick knockout of Dan Henderson earlier this month in Brazil.

Now, both Silva and Belfort stand as ageing veterans with controversial pasts and unknown futures.

However, if UFC president Dana White has any say in anything, the two stars could potentially meet once again. On a recent edition of the Joe Rogan Experience, Rogan expressed his interest in the rematch, and White was also in favor:

Would you like to see the two Brazilians mix it up again, and who would you pick to win?