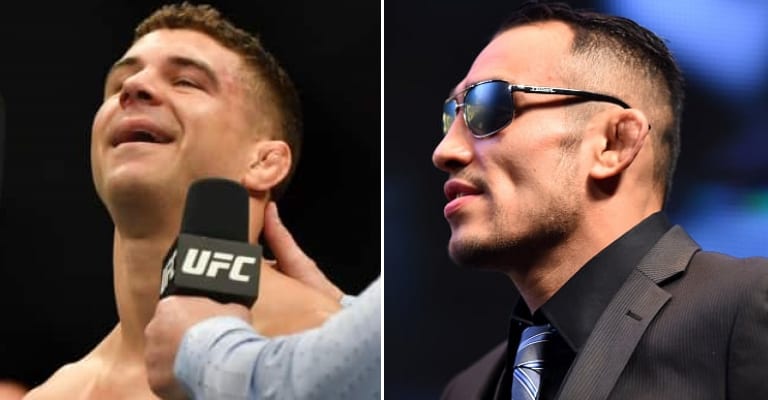 UFC lightweights Tony Ferguson and Al Iaquinta have jumped headfirst into a raging online battle in the weeks after UFC 223.

The Long Island-based Iaquinta replaced Ferguson to battle Khabib Nurmagomedov in the main event of the chaotic April 7 card, fighting valiantly but ultimately being dominated by a pair of 50-43 scorecards in a lopsided unanimous decision.

The MMA world has largely given credit to Iaquinta, who was originally scheduled to meet Paul Felder at the event, for stepping up on 24 hours notice to face arguably the most dominant lightweight in the world. But former interim champion Ferguson, who’s recovering from the knee surgery that forced him out of his fourth scheduled fight with Khabib, isn’t among those supporters.

Instead, he’s taken to social media to call out Khabib for beating a “real estate agent, non-full-time fighter ranked number 11” for the title, which predictably prompted the outspoken, opinionated Iaquinta to respond on Twitter. Now, however, “Ragin'” Al has taken things to a new forum, going off on Ferguson in a spot with Submission Radio via Bloody Elbow. Iaquinta believes the way Ferguson was forced out of the biggest fight of his career was ridiculous, and thus his ‘weird’ rival shouldn’t be talking any trash from the sidelines:

“You’re a f—king idiot. If that happened to me, if I had to pull out of a title fight because I tripped over a wire, you’re not hearing me talk shit on twitter at all. I’m gonna hide somewhere, I’m not gonna act tough. He’s acting tough,” he continued. “Right now, a middle school kid could kick the shit out of him right now because he can’t do anything. You can’t talk shit when you’re in the state that you’re in.

“That guy is so weird. He’s so weird, he just doesn’t — who cares about that guy? He’s really just good at fighting and that’s it. If it wasn’t for fighting he’d be like a worthless person.”

There’s no doubt that Ferguson had become a polarizing personality during his impressive 10-fight win streak, often rubbing people the wrong way or even outright confusing them with his strangely-capitalized online posts and cryptic statements that were often tough to decipher.

But even though he won the interim title by stopping Kevin Lee last October, it hasn’t translated to mainstream success in any shape or form, and Iaquinta put that on his unique personality, twisting the knife by saying the only reason people even watch him is to see him get beat up and then somehow come back:

“There’s no point to Tony Ferguson besides, honestly, really like, people beating his ass. He gets dropped every fight and he’s out of his mind. People like watching get his ass kicked and come back and win. That’s the only thing that Tony Ferguson is good at in the world. No one likes his personality, he’s a weird dude.

“I don’t even know, what’s the point in that guy? There’s no point. Just go away. You tripped on a wire and I got the title shot, now you’re gonna come at me? I’ve fought with worse injuries than that, guaranteed, in my career. You get to fight week, you’re fighting. You don’t pull out of a fight during fight week. Don’t come after me cause I took advantage of a situation that he couldn’t capitalise on.

“How many fights in a row has he won? 10 fights? And he still hasn’t fought for a title? Like, there’s a reason for that. No one likes you. Go away.”

As far as their online trash talk battle is concerned, Iaquinta is sick of Ferguson’s supposedly two-faced congratulations followed by trash talk, and he’s also sick of him capitalizing every word in his posts:

“I really have no idea what the f—k the guy’s talking about at all. He says he was rooting for me and then he goes and says that. I don’t know. The guy’s weird. He’s making fun of my grammar and then he capitalizes letters and every letter. The first letter of every word is capitalized and he’s making fun – I put ‘your’ instead of ‘you’re.’ Same shit, it’s f—king twitter, shut up, who cares. That guy is just annoying.”

It may seem Ferguson is trying to keep himself relevant while injured by talking continued trash online, and in today’s social media-driven, fast-paced MMA world, that isn’t the worst idea given he’s facing what could be a lengthy recovery.

A big part of that is to apparently criticize and clap back at all of the parties involved at UFC 223, but Iaquinta put that in a brutally honest perspective by continuing to note that Ferguson was forced out of a big fight and has no room to talk until he can return to the cage:

“He really needs to go away until he can fight, and then once you fight, just fight, dude. Everyone likes you fighting. Not a single person likes that guy. Everyone on Twitter, everyone that I talk to is like, just shut up, man. You know, everyone was looking forward to that fight. He disappointed so many people, and I come in, you know, save the day. Don’t freaking say shit about me, bro.

He’s been dropped in every fight. I drop someone, I kill them, I put them out. It’s a different style match-up than me and Khabib, and I didn’t train right for that fight. And especially right now, I could beat the shit out of Tony Ferguson with my pinky finger. The guy can’t even walk. You can’t talk shit right now.”