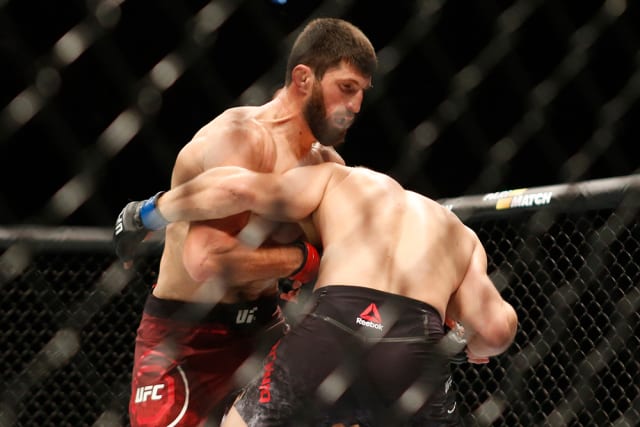 Magomed Ankalaev and Abreu will kick UFC Prague‘s main card off on Saturday in an important light heavyweight contest.

Stay posted to LowkickMMA as we will have ongoing results from the entire UFC on ESPN+3 card.

Ankalaev (10-1) will make his third appearance in the Octagon in Prague. The Russian native has gone 1-1 thus far and looks to get on the plus side of 500 this weekend.

As for Abreu (14-2), the Brazilian will be making his UFC debut Czech Republic. The 26-year-old has accumulated titles in nearly every promotion he has competed for.

Ankalaev gets backed up immediately by the bigger Abreu. Abreu throws a high kick that the Russian brushes off. Ankalaev closes the distance and wrestles Abreu back to the cage. He works to get the Brazilian to the canvas. Some time goes by as the crowd lets out some cheers. Abreu lands a right hand on the break. The fighters separate. Both men engage in a wild exchange, neither man landing anything significant, . Ankalaev lands an uppercut that drops Abreu. Abreu’s nose looks to be broken. Ankalaev gets Abreu to the ground and stalls the fight in top control. He lands just enough ground and pound to keep the fight there. Ankalaev lands a few elbows in the closing moments of the round.

Abreu’s nose is shaped like a capital Z to start round two. Abreu takes the center cage and pumps the jab. He lands a left head kick but Ankalaev eats it. Ankalaev settles into the center of the Octagon and lands the uppercut again. Abreu charges with a swarm of punches and lands a left and a right over the top. Again, the Russian eats it. The Brazilian pumps the jab to the body. Abreu lands another jab as Ankalaev lands a right hand to the broken nose of Abreu. Abreu with a level change. he muscles Ankalaev against the cage and works for a takedown. The Russian reverses positions and trips Abreu to the canvas. 60 seconds left in the round and Ankalaev is in Abreu’s guard landing decent ground and pound as the round ends.

The last round starts with a fist bump. Ankalaev lands a hard straight right hand to start. Abreu circles left and a flying knee but his balance and to the canvas. Ankalaev looks to capitalize but the Brazilian gets back to his feet. Both men are far less active here in the final frame. Ankalaev still looking for the uppercut. Halfway through the last round, Abreu throws the jab to the body. Ankalaev starts to pump his jab as there is just not much going on here in round three. The fighters clinch and Ankalaev works the Brazilian to the cage. He lands a couple knees to the body and a hard elbow to Abreu’s head. He looks for a takedown but Abreu defends nicely. The referee separates the fighters with 45 seconds left. The round ends with the fighters trading.