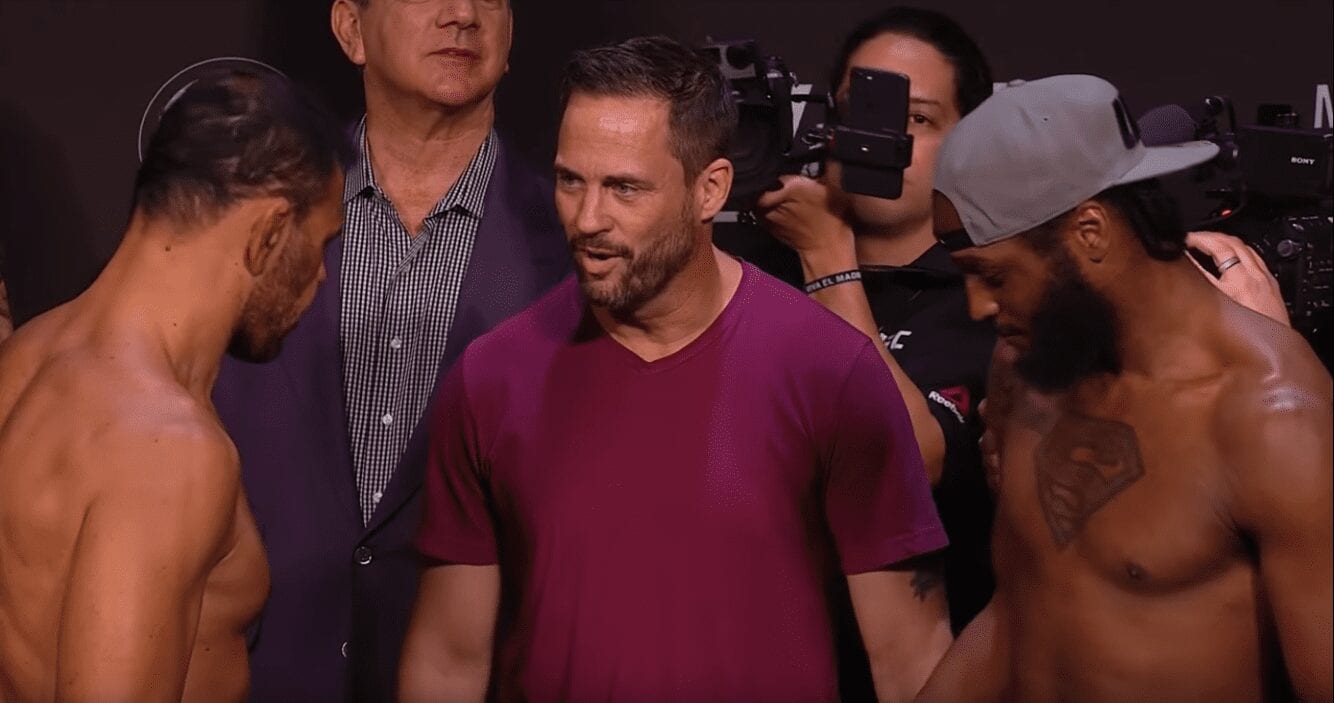 UFC 237 preliminary card results are underway as the Las Vegas-based promotion holds this latest event on television for fight fans around the world to watch the show.

It’s once again fight day here at LowKickMMA, and the talent on display tonight (Saturday, May 11, 2019) will come in the form of UFC 237. Headlining the card are Jessica Andrade and Rose Namajunas, but there’s a whole bunch of great fights also taking place on the preliminary section of the card.

Antonio Rogerio Nogueira vs. Ryan Spann in a light heavyweight bout closes the preliminary card on ESPN in what should be an interesting fight. In the first-round, Spann lands a massive left uppercut to the jaw. Nog is down and then out from follow-up punches.

Kurt Holobaugh vs. Thiago Moises is next in a lightweight bout. In round 1, Moises separates and then shoots in to score a perfect double-leg takedown. He’s in top half guard, looking to pass. In round 2, Moises changes levels and shoots in for another perfect takedown. They trade punches in the center of the cage. Moises with a pair of elbows to the head.In round 3, Holobaugh comes in with punches, but he walks into a short right hook and he’s dazed. Holobaugh is off-balance. Moises shoots in and lands in top half guard. The judges gave the win to Moises.

Warlley Alves vs. Sergio Moraes is next in a welterweight bout. A huge uppercut from Alves in the third round left Moraes in a heap on the canvas.

Clay Guida vs. B.J. Penn in a lightweight bout opens the ESPN preliminary card. In round 1, Guida comes out firing punches to the head right away. BJ is weaving to avoid them. It’s a close round of striking action. In round 2, Guida lands a few punches and then shoots in. Penn stuffs him but Guida has him pressed into the fence. Penn moves from the cage but he’s breathing heavily now. In round 3, Penn is wobbly and gassing out. Guida presses him into the fence. Guida can’t take him down, and is landing punches to the head and body. Penn escapes the fence. The judges gave the win to Guida by unanimous decision.

Luana Carolina vs. Priscila Cachoeira in a women’s flyweight bout finishes off the ESPN+ preliminary card. In round 1, They are now swinging wildly, both landing punches. They clinch and Carolina looks for a standing guillotine, but it’s not tight. Carolina is bleeding from near her right eye. In round 2, They come out swinging for the fences early. Both land clean punches. Carolina pounces and goes for an armbar and then a triangle. Can’t get it. In round 3, Carolina backs away and then blasts her foe with a spinning backfist. Cachoeira is trying to get inside but she’s tired and eating kicks to the body now. The judges gave the win to Carolina.

Raoni Barcelos vs. Carlos Quiroz is next in a bantamweight bout. In round 2, Barcelos with a storm of elbows from top position, but Huachin was blocking them well. The referee intervenes despite this and it seems like a quick stoppage.

Opening the ESPN+ prelims is Talita Bernardo vs. Viviane Araujo in a women’s bantamweight bout. In round 3, Araujo tags Bernardo with a slick right to the temple. Bernardo backs away and is blasted by a massive shot for the win

Welterweight bout: Warlley Alves def. Sergio Moraes by knockout (punch) at 4:13 of Round 3