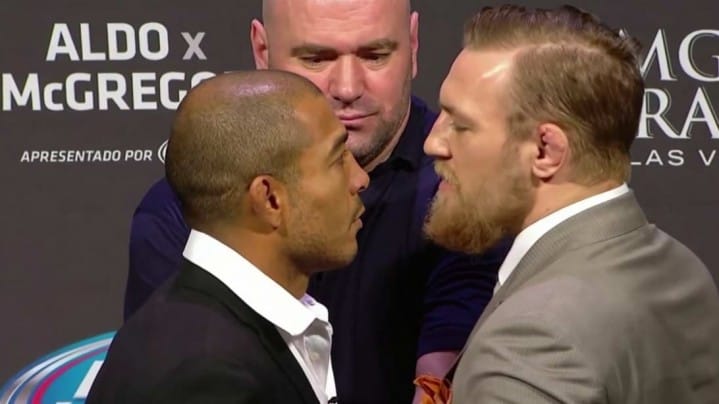 With Dublin native McGregor a huge fan favorite in the Irish hotbed of Beantown, things not surprisingly got a little chippy (as if they weren’t already).

Longtime featherweight champ Aldo has been noticeably angry at the brash talk and antics of “Notorious,” and he’s said that he’s ready to brawl if McGregor touches him during a staredown. In order to prevent that, UFC President Dana White had to get in between the fighters during today’s face-off. Check it out:

All in all, it’s a bit of a surprise in that the two enemies hadn’t gotten into something resembling a physical confrontation after spending so much time up close and personal with each other. There’s still plenty of time for that with six cities left on the tour, however.

If you can’t get enough Aldo vs. McGregor, here’s the all-new fourth episode of UFC 189 World Championship Tour chronicling more of the champ and challenger’s visit to Las Vegas earlier this week: