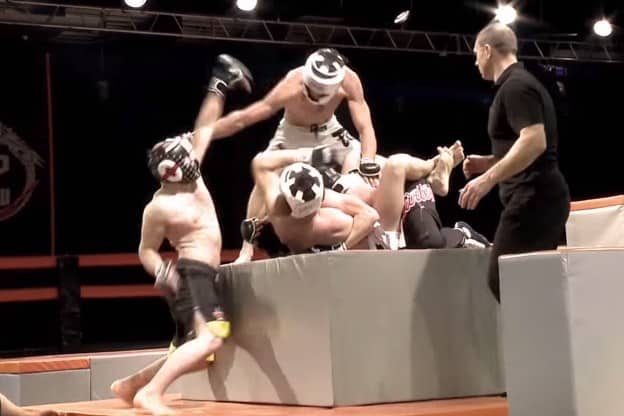 As crazy as it seems, the idea of two on two competitive mixed martial arts (MMA) is an idea that is being discussed, and an idea that could potentially be sanctioned at some point.

Casey Oxendine, an advocate for the idea, pitched his idea in California last month at the Association of Boxing Commission’s annual conference, and he also spoke to MMA referee John McCarthy there, who thought he was crazy:

“I kind of explained it,” Oxendine told MMAjunkie, “and he looked at me sort of funny. He said, ‘You’re about to get torn to shreds trying to get this thing passed.’ I just smiled and told him, ‘Well, that’s the kind of thing I live for.’”

However, although it sounds out of this world, it seems as if Oxendine had a solid presentation, according to California State Athletic Commission Executive Director Andy Foster, who said that the idea is almost comical, but that Oxendine was well-prepared:

“I thought he was well-prepared,” Foster said. “His video was quite good. And I thought it was almost comical watching it. I mean, have you ever seen this thing?”

Surprisingly, this isn’t the first talk of a new type of MMA combat, as it’s actually happened before, specifically during “The Hip Show”, a Russian event that gained quite a bit of American attention last year. Oxendine helped provide English commentary during the Eastern-European show for the American market.

Now the CEO of Arena Combat, Oxendine is just continuing a life filled with MMA, as he is a jiu-jitsu black belt, a teacher, a former referee, as well as a promoter in his home state of Tennessee. Check out this informative video of Arena Combat, and get yourself a little more acquainted with the MMA craze that is seemingly whipping up a storm across the USA:

A former student of Oxendine’s, Blake Grice, who now serves as the head referee for the South Carolina Athletic Commission, was cautious about team MMA at first as well. However, after refereeing it, he learned that there are actually rules and regulations:

Grice says he was reluctant to the idea at first, until he got hands on experience at a recent event:

“I thought it was crazy at the time,” Grice said. “These guys were tackling each other off of obstacles, and it just looked super dangerous. Then I agreed to ref it and learned that that’s against the rules.”

Grice continued on, saying that with the rules set in place, the sport isn’t as dangerous as it seems:

“It’s not as dangerous as it seems, with the rules that are in place and three good referees,” Grice said.

However, that doesn’t mean that the team events will be sanctioned all over America, especially with prominent commissions such as the CSAC. Foster said that although Oxendine is a decent human, and decent fighter, his idea just won’t be supported in California:

“Casey’s a good guy, a great grappler, but he and I just have a fundamental disagreement on this Arena Combat thing,” Foster said. “I think it’s fair to say that our position here in California is that Arena Combat does not conform to the rules of the California State Athletic Commission. The commission will not be regulating these events. And we’re really not open to discussion. We’re saying no, and there’s a period behind the no.”

Foster’s firm stance will not stop Oxendine, and Grice, however, as the two are determined to launch their Arena Combat idea no matter what. The Carolina Commission has sanctioned the next Arena Combat event, which will go down on September 26th.

Perhaps with the masses of media attention being thrown towards Oxendine’s budding promotion, this previously unknown thread of MMA will start to intertwine with the mainstream side of the sport.  CEO Oxendine describes the revolutionary take on MMA as follows:

Grice continued, speculating and comparing Oxendine’s vision to the early days of the UFC:

“Looking back to UFC 1 until now, look at what it’s done,” Grice said. “I think it’s because people gave it a chance. People go to MMA shows every weekend. This is a little something different. It’s refreshing.”

Want to see some more ref cam action? Sure, check it out:

Oxendine believes that the idea is awesome, and that fans will watch:

“But we’ll also get the people who watch stuff like ‘American Ninja Warrior,’” Oxendine said. “This is like how you’d see stuff in movies or on ‘Star Trek,’ people walking around with little computers in their hands, and that stuff was sci-fi then but it’s reality now. This is the same thing. It’s futuristic, and it’s awesome. The people involved in this now are pioneers.”

Would you ever, or have you watched Arena Combat?