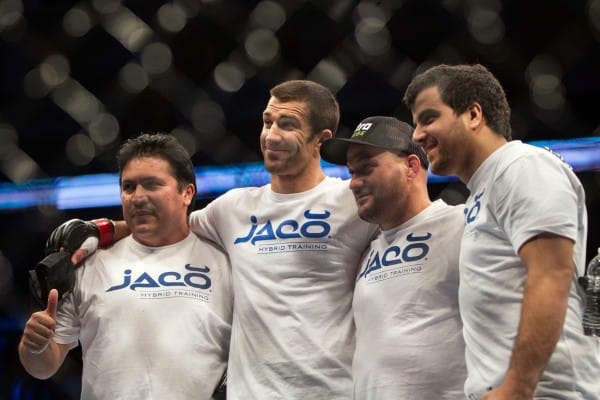 The American Kickboxing Academy in San Jose, California is home to some of the best mixed martial artists in the world including UFC champions Luke Rockhold and Daniel Cormier, former champion Cain Velasquez, and top contender Khabib Nurmagomedov.

The success of the team inside of the cage speaks for itself, but AKA has also garnered its fair share of criticisms due to its somewhat questionable injury history.

Velasquez and Nurmagomedov have been plagued with injuries over the last few years, and Cormier also recently pulled out of a highly anticipated title fight to due to an injury suffered in training.

While many have fired shots at the team, and more specifically at Velasquez, Rockhold recently spoke on the situation, saying that injuries happen in MMA, and that nothing is intentional:

“Injuries happen, we have a high level of competition at the gym,” said Rockhold in a recent interview with MMA Fighting. “But we’re family and people aren’t trying to hurt each other. From time to time, things happen. I don’t believe we have a big problem with injuries. I know myself, I know DC, I know a lot of these guys and a couple injuries plague you, but the rest of us have been pretty healthy.”

Continuing on, the reigning 185-pound champion said that AKA is simply the best camp in the world with the best fighters pushing each other to their limits:

Do you agree with Rockhold, or does AKA seriously have to consider their training methods?