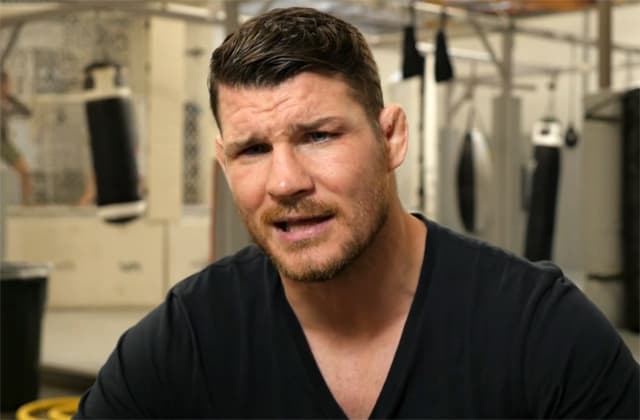 After nearly three years away from the sport, former longtime welterweight champion Georges St. Pierre recently announced that he would be making his long awaited return to action and UFC President Dana White made it clear that “Rush” would be taking on reigning middleweight king Michael Bisping later this year.

While the fight will certainly be a blockbuster bout, UFC commentator Joe Rogan recently criticized the booking, saying that the fight takes away the value of a championship belt.

Bisping has since responded to Rogan’s comments, arguing that the commentator ‘contradicted’ himself:

“Listen, Joe’s a very smart man and he’s very learned on the subject of mixed martial arts and the UFC,” Bisping said on his Sirius XM podcast The Countdown. “He’s been around forever. He knows the sport, but as I say, he kind of contradicted himself. He’s like, ‘why have title fights?’ but then he says, ‘I, for sure, would get the popcorn and buy this PPV.”

Continuing on, “The Count” feels as if he has earned the right to lobby for the most lucrative fights available given the years he has put into the sport of mixed martial arts:

“See, to become a champion, you have to pay your dues which I did for a long, long, long time. When you become the champion, it changes because now, it’s only a very small portion, but you get a portion of the PPV. Now every single fight you have, there’s a possibility you’re going to lose that fight, So you want to maximize the potential.

“You want the fights to be as big as possible, but in terms of credibility as well, that has to be a factor. With Georges St-Pierre coming back, I feel like I’m trying to justify a point that I’ve said a million times, but Joe actually just said there himself, he would buy the fight. He 100% would buy it, so therefore, there goes my argument.”

Those who have agreed with Rogan have criticized the booking simply because St. Pierre, a natural welterweight who hasn’t fought since UFC 167, is returning and leap frogging worthy 185-pound title contenders, most notably No. 1-ranked Yoel Romero. In regards to this idea, Bisping said that St. Pierre will serve as a ‘warm-up’ fight for Romero, who “The Count” plans to take on shortly after his bout with GSP:

“Well actually, it’s not crazy, it’s not ludicrous, it’s not beyond the realms of imagination, because Georges St-Pierre, in a lot of ways, is the perfect warm-up fight for Yoel Romero,” Bisping said about Rogan’s criticism of fighting Romero immediately after GSP. “They’ve got very similar styles. Yes, Yoel is bigger and hits harder, but they’ve both got fantastic wrestling, they’re both shorter guys than me.

What do you make of Bisping’s response here?