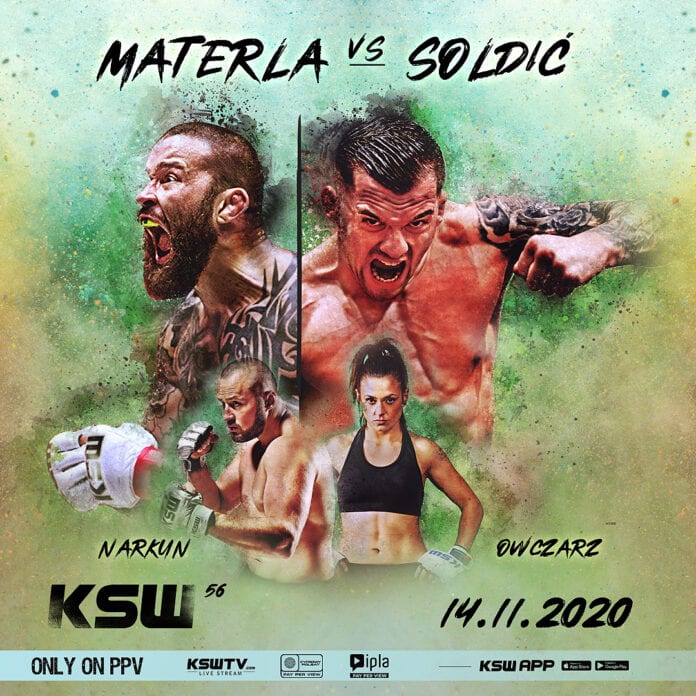 KSW returns this weekend with KSW 56 going down on Saturday, November 14, in Lodz, Poland. A middleweight clash and a light heavyweight title bout will headline the eight-fight card. KSW 56 is scheduled to start 3:00 pm (ET) and can be watched via PPV at KSWTV.

In the main event, KSW welterweight champion Roberto Soldic moves to middleweight and will take one of the divisions former champions Michal Materla. Soldic comes into this bout riding a four-fight winning streak and looking to establish his credentials in the heavier weight class with a win over one of KSW’s veteran fighters.

Materl’s most recent outing was at KSW 55, where he stopped Serbia’s Aleksandar Ilic in the second round. The 36-year-old made his debut appearance for the Polish promotion back in 2006 and has fought over a dozen times under the KSW banner.

Tomasz Narkun defends his light heavyweight strap in the co-main event when he takes on the undefeated Croatian Ivan Erslan. This fight will be the fifth title defense of Narkun’s reign. This fight will be Erslan’s second fight for the promotion, and he comes into this fight backed by three straight first-round TKO victories.

Other bouts of note are the 161lbs catchweight bout between Oktagon Champion Mateusz Legierski and Francisco Barrio and the featherweight scarp between PFL veteran Max Coga and Daniel Torres.

Here is the full lineup for KSW 56 below.