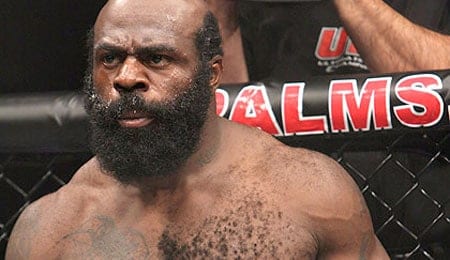 The two combatants were originally scheduled to meet in Oct. 2008. “The World’s Most Dangerous Man” was forced to pull out of the bout due to a cut over his eye.

Slice appeared on The Ross Report and told World Wrestling Entertainment (WWE) legend Jim Ross that he won’t allow Shamrock to end their fight via submission:

While many have dismissed Slice’s upcoming bout due to Shamrock’s age (51-years-old), the former bare knuckle fighter says age is just a number:

Slice hasn’t stepped inside an MMA cage since his UFC 113 contest with Matt Mitrione back in May 2010. Slice lost the contest by way of TKO in the second round. Slice, however did earn a 7-0 boxing record since that time with six of those wins ending in a knockout.

Like his opponent, Shamrock hasn’t competed in an MMA bout since 2010. In that fight, Shamrock injured his hamstring, giving Mike Bourke a TKO victory.