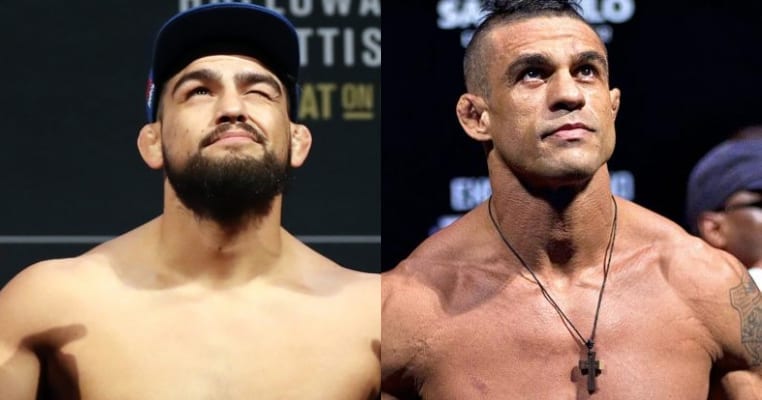 He may be campaigning for yet another shot at 170 pounds, but Kelvin Gastelum may be adding another top-ranked middleweight to his record early next year.

The rising 185-pound fighter, who was forced to go up to middleweight after he badly missed the welterweight limit of 171 pounds once again prior to his scheduled bout with Donald Cerrone at November 12’s UFC 205, promptly took a short-notice bout with longtime veteran Tim Kennedy and parlayed it into the biggest win of his MMA career.

According to a report from Combate, however, Gastelum may have the opportunity to top even his win over Kennedy if rumors prove true he will face former UFC champ Vitor Belfort at the March 11, 2017 Fight Night event from Fortaleza, Brazil. The rumored bout is the only one to have been discussed for the card.

If it indeed proves true, Belfort will have an uphill climb to get back to the nigh-indestructible form he once exhibited during a torrid, TRT-enhanced run to a title shot in 2013. Belfort has lost two straight and three of his last fights by TKO, absorbing one-sided defeats to Ronaldo Souza and Gegard Mousasi at UFC 198 and UFC 204 this year. He seemed to hint at retirement following his loss to “The Dreamcatcher” in Manchester in early October, but rapidly backtracked on the a cryptic social media post to say he would fight on.

Putting the proverbial train back on the tracks will be a challenge against Gastelum, however, The Ultimate fighter (TUF) 17 winner whose only losses came to current welterweight titleholder Tyron Woodley and Neil Magny, each by split decision. His weight management issues his most glaring obstacle, Gastelum also owns wins over former welterweight champion John Hendricks and former middleweight title contender Nate Marquardt.

Securing a win over a time-tested legend like Belfort would certainly plant Gastelum in the thick of the talented middleweight talent pool, making a third run at welterweight – where he’s missed weight three times – extremely unlikely.

Stay tuned for more news and updates about this bout and the March 11 card from Fortaleza.