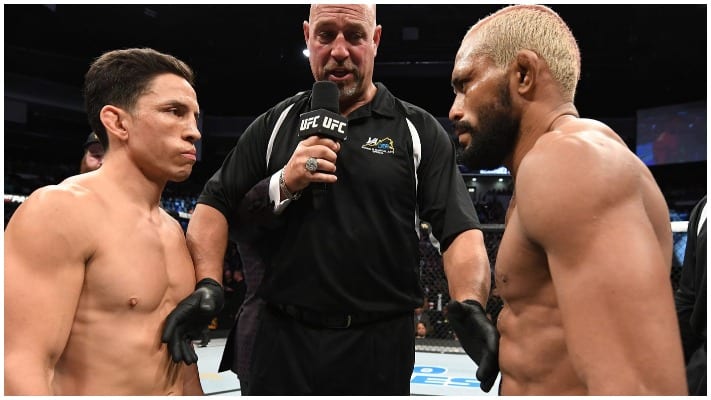 At the UFC Fight Night: Benavidez vs. Figueiredo media day, half of the main event Joseph Benavidez shared his mindset going into this rematch.

Responding to a question from MMAFighting, Benavidez stated that while he doesn’t know him personally, he doesn’t like Figueiredo.

“Just the fact that he’s kind of like a villain to everybody, I think. I don’t like him.” Benavidez said. “That is rare for me. It’s not personal cause I don’t really know him, know him personally and everything. I definitely don’t like him.”

Benavidez continued to state that he wants to hurt Figueiredo in the rematch this weekend.

“It definitely makes you want to go out there and hurt someone worse because when you fight, you win … you hurt him by proxy winning an MMA fight. You kind of have to. It’s one of those things where I want to put this guy away. I want to shut him up. I just don’t like him and that rarely happens in my career.”

The two first met earlier this year and were set to face off to determine the Flyweight champion of the worlds, however, due to Figueiredo missing weight the title was only on the line for Benavidez.

During this fight, Figueiredo found the finish via KO in the second round. Shortly prior to this there was a clash of heads that became the topic of conversation following, with some people believing this clash of heads led to Benavidez being finished.

This rematch has already had its share of drama in the lead up when Figueiredo tested a false positive for COVID-19. After being cleared, he flew to Abu Dhabi where he has been isolating since.

Both fighters are yet to weight in, however, Figueiredo has shared that he believes he will come in under weight this time and that his isolation in the fighter hotel has been no problem.

Who do you think will emerge victorious as the flyweight champion?