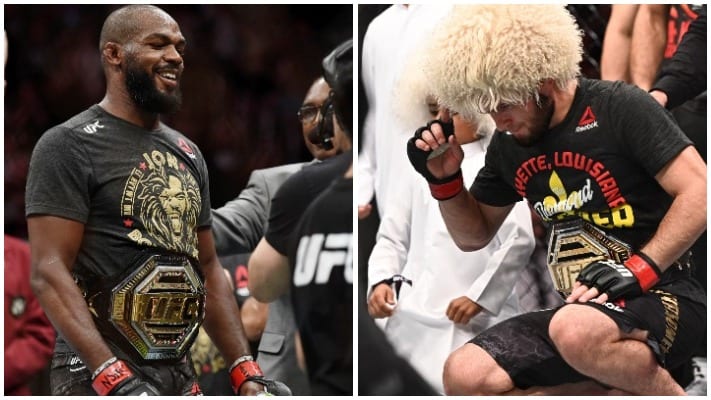 Ever since Khabib Nurmagomedov’s win over Dustin Poirier, the debate among fans has been about whether he or Jon Jones can be regarded as the pound-for-pound best in the sport.

Nurmagomedov is 28-0 and has dominated just about every opponent of his. However, Jones has been at the top for much longer and has faced higher-level competition throughout his career.

Glover Teixeira was notably one of Jones’ victims but even he rates Nurmagomedov higher in the pound-for-pound debate:

“I think Jon Jones is up there for sure,” Teixeira told reporters during media day. “But after I saw Khabib’s last fight… Dustin Poirier, I saw that kid training, I saw how good he is, and the way (Nurmagomedov) dominated Dustin Poirier… In my mind, he’s definitely the No. 1 pound-for-pound.”

While Jones has more title defenses, a superior resume and is technically unbeaten, for Teixeira, it all boils down to dominance — and that’s where Nurmagomedov is superior:

“Jon Jones wins more title defenses, but Jon Jones hasn’t dominated opponents the way Khabib has been, you know?” Teixeira said. “Khabib looks way too much, you know what I mean? He’s way above. He’s like a 10 and other people he’s fighting are sevens.”

Do you agree with Teixeira?