LowKickMMA.com
Home MMA News Fabricio Werdum: If You Ask Around, No One Knows Who Fedor Is 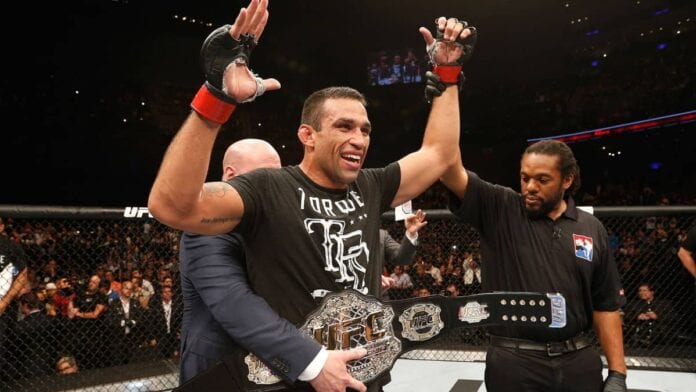 The speculation continues to grow as to where all-time great Fedor Emelianenko will end up after announcing his return to active competition last month. Many thought Bellator was the obvious choice, but it was reported that Emelianenko and the UFC were involved in negotiations, leading many to believe that “The Last Emperor” could end up in the Octagon.

It would make a lot of sense for the 38-year-old to sign with the UFC, as many rematches await him including a possible rematch with current heavyweight champion Fabricio “Vai Cavalo” Werdum, who Emelianenko lost to back in 2010.

Despite numerous losses at the end of his run, Emelianenko is widely considered to be one of the greatest mixed martial artists of all time, and a return bout with Werdum for the title would be absolutely huge.

However, “Vai Cavalo” doesn’t think it would be fair if “The Last Emperor” received a title shot right away, as he hasn’t fought in three years. Werdum believes that the Russian should have a tune up fight of sorts first:

“I don’t think we can do a rematch now because he hasn’t fought in three years,” Werdum told MMAFighting. “If he signs with the UFC, I don’t know if they would give him a title shot already. I think it would me fair if he fought before, and then he fights for the title.”

However, that doesn’t mean that the champion would decline a rematch, saying that if the UFC did indeed sign Emelianenko, that he would fight him. Werdum also noted that due to “The Last Emperor’s” departure, many fans don’t actually know who he is:

“Maybe they do a rematch with Fedor in December,” he said. “Even though the new fans don’t know much about Fedor’s history, the old fans, those who know MMA, know who Fedor is. That might happen. It only depends on the negotiation.”

“He lost twice after I beat him, and people forgot him too fast. If you ask around who Fedor is, no one knows. He was undefeated for 10 years, and he needed some rest. It would be cool if the UFC signed him. I would give him a rematch no doubt.”

Would you like to see Emelianenko return and meet Werdum for the UFC heavyweight title?