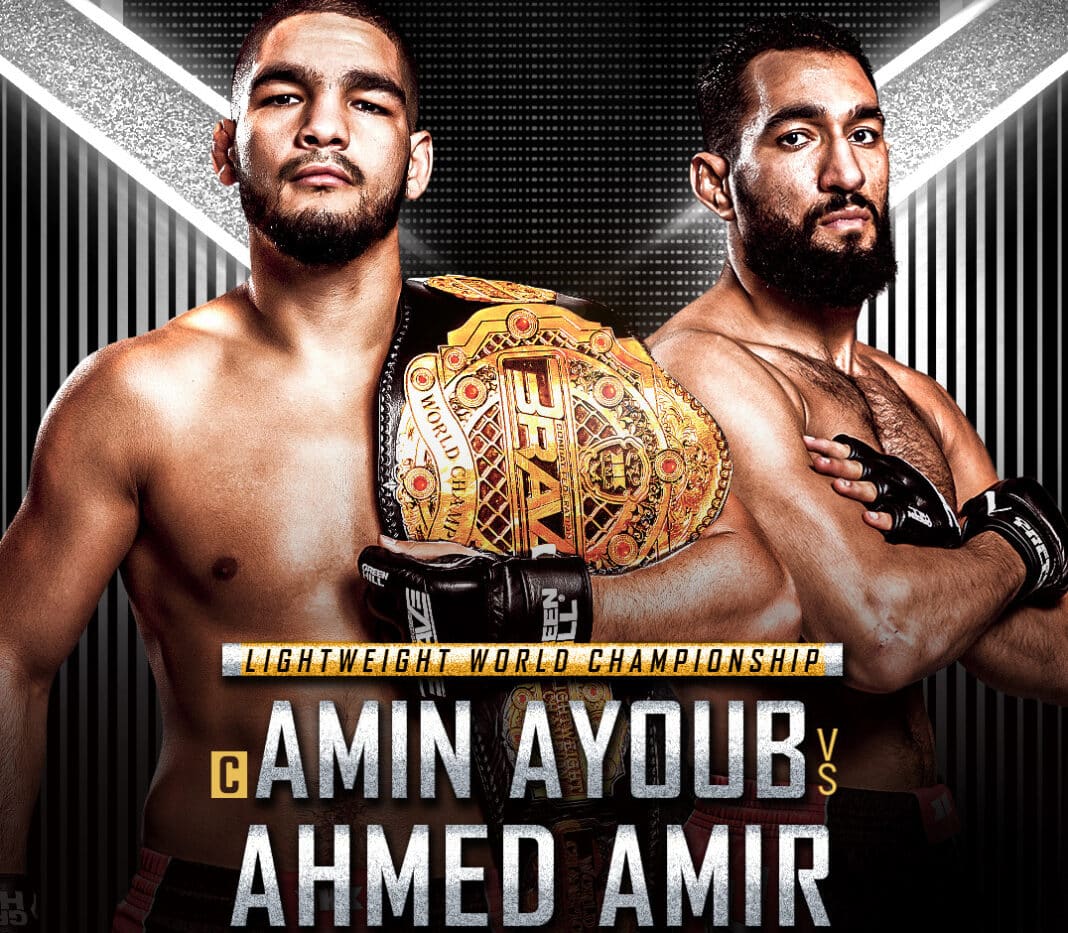 BRAVE CF Lightweight Champion Amin Ayoub is counting down the hours until his return to the cage this weekend. The French-Tunisian is preparing to defend his lightweight strap for the first time since winning the title at BRAVE CF 44 last November. Ayoub will take on Egyptian grappler Ahmed Amir in the main event of BRAVE CF 54, with the card marking the promotion’s first visit to Poland, which goes down this Saturday, September 25, in the city of Konin.

Ayoub was set to fight Amir at BRAVE CF 50 until a neck injury forced Amir to withdraw from the contest at the last minute. Ayoub went on to defeat Uzbekistan’s Mashrabjon Ruziboev in a 74kg catchweight bout. However, his performance failed to impress Amir, who ran up to the cage at the fight’s conclusion and began firing verbal volleys in Ayoub’s direction.

The two already had established a mutual dislike of each other, but after Amir’s cage side antics at BRAVE CF 50, Ayoub is looking forward to finally getting the chance to silence his opponent once and for all.

“I feel very good. I am in a hurry to be in the cage for this defense, Amir is a very aggressive fighter, very arrogant outside the cage, and he wants to put on a show, so let’s do that, ” Ayoub says, speaking to LowkickMMA.

” He was not happy with my performance when I won against Ruziboev, and he came just beside the cage, but man, if you got an injury, what are doing in the arena, what are you doing beside the cage, stay in our room. You can talk talk talk, but he will pay for that in the cage.”

The 25-year-old comes into bout this riding a wave of confidence as well as an eight-fight winning streak. Ayoub is one of the representatives of the growing French presence in MMA. At 15, he began kickboxing, but MMA was always in his blood. After developing his skill set as a striker, Ayoub headed to Belgium in 2014 to follow his MMA dream since MMA was illegal at the time.

Back-to-back losses in his first two bouts only fueled his fire, and after picking up his first win to help ring in the New Year in January of 2015, the Nantes-based fighter never looked back.

“I fought in small organizations, and after that, I moved to bigger and bigger, and now I am with BRAVE, and BRAVE is very good,” Ayoub explains.

He goes into this weekend’s bout knowing that Amir will want to get him to the ground as soon as possible. However, an extensive training camp in Bulgaria has him feeling he is ready for anything the Egyptian might throw at him.

” I think I am much better than him, so maybe in the first or second round, it will be finished,’ he says.

“I went to Bulgaria for a big training camp with Moldovan people and Bulgarian as well and all the best fighters from my management team, everybody came to Bulgaria to train together it was very good. Two weeks of a hard training camp and after that came back to France to train with my team, very good wrestlers, very good kickboxing as well. So I feel ready.”

After MMA became legal in France at the start of 2020, the local MMA scene exploded into life following a four-year ban. Ayoub is proud to stand alongside his fellow French athletes in helping to put MMA on the map in France.

“Now in France, we have [UFC interim Heavyweight Champion] Cyril Gaines. It’s amazing for us because we have many talents in France. We want to show to the world we have many tough fighter,we are friends here. If my friend will fight, I will support him; we are like brothers in arms in France.”

Will you be watching BRAVE CF 54