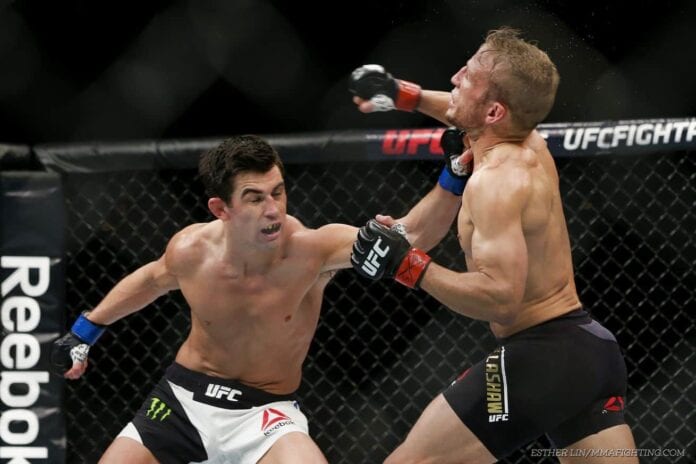 Some might have expected a stronger reaction from Dominick Cruz about the TJ Dillashaw drug testing scandal. However, the former bantamweight champion was instead more sympathetic.

Dillashaw was recently suspended for two years after failing a USADA drug test, with it later coming to light it was due to EPO use.

Most of the MMA community reacted strongly to the news, but Cruz, who notably defeated Dillashaw in 2016 to regain his bantamweight title, looked at the positives behind it.

“I wouldn’t have been surprised if he did or he didn’t test [positive], to be honest,” Cruz said on Ariel Helwani’s MMA Show (via BJPenn.com). “Realistically, I have no attachments to TJ Dillashaw or his decisions. I just don’t. He chose this… I actually feel bad for him. Regardless of what I think, the world believes that there’s an asterisk next to it (his career). Same with Jon Jones. There’s an asterisk next to the story. So at this point, I think he’s gonna come back. Two years really is nothing. I’ve been out longer than that injured. And he’s just gonna get healthy.”

Dillashaw Will Get Better?

Cruz has long suffered from injury problems, notably fighting just once in over four years until early 2016. However, he came back to regain the crown he never lost. So it’s no surprise that he thinks this layoff could be beneficial for Dillashaw as well.

“[The suspension time is] being played out as a much bigger picture than it is. If anything it’s a gift.”

That’s certainly a different way of looking at the situation. But what can’t be ignored for Dillashaw is that his reputation and legacy have been tarnished. In addition, he won’t be receiving a paycheck until 2021, at least through fighting.

As for Cruz, who last fought in December 2016, he expects to return to the Octagon later this year.