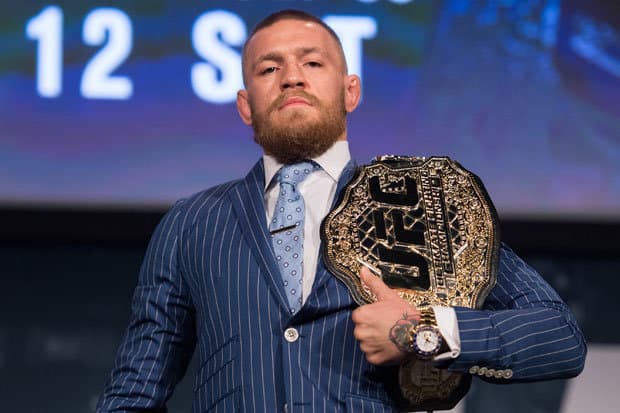 Conor McGregor is just 24 hours away from attempting to make UFC history, when he takes on Eddie Alvarez in the main event of UFC 205 tomorrow night (Saturday November 12, 2016), in attempt to become the first dual-weight champion in promotion history.

Earlier this week the stars involved in the three title bouts that are set to take part on the massive New York card, giving ‘The Notorious One’ the opportunity to once again spit fire at his opponent

“This just puts it even more in stone, that second belt — it’s never been done, no one has even came close,” McGregor said. “No one has even attempted it. That’s it, I’ll be immortalized after this one.”

“I’ll army up, then I’ll see what kind of army they bring and we’ll go from there. We’ll cross that bridge when we get there.”

“I don’t know about the whole Pat Lunval situation, that she got sacked a day after giving the biggest money man in Las Vegas history a fine that is gonna keep him out of the city,” McGregor said. “I don’t know if that is the reason why she got the sack, I don’t know. Look, I’ll see. Who knows? I f*cking love this place, I know that. So we’ll see.”

“I predict I rearrange his face. He is too easily hit, throughout the talk and everything else, he is hit too easily. It has happened to him throughout his whole career. Your talking about someone with the precision I have, I’m gonna hit him, he’s gonna fall, maybe if his toughness holds up he’ll survive. Then his face will begin to be rearranged. That is what I predict. I think one round, if he can drag it out into the trenches I’ll take my hat off to him, but he’ll never be the same after if that is the case.”

“Of course, I certainly believe in my shots, I believe in everything I have here to put this man away,” said McGregor. “I am prepared for the five rounds, I kind of hope it is five rounds because they have discussed the cardio as an advantage on his side, when I completely disagree on that. So if he can make it into the trenches we will see, but I am prepared for five rounds. We’ll see, I don’t think he’ll get out of the first round.”

“I feel he is damaged goods. His career he’s been damaged big time, but looking at him he’s aged, looks a bit gaunt. Yeah I’m happy with it, but at the end of the day we’ll go in there and fight, the shots will land and regardless if he is feeling good or feeling bad. My shots do damage, and that’s it.”