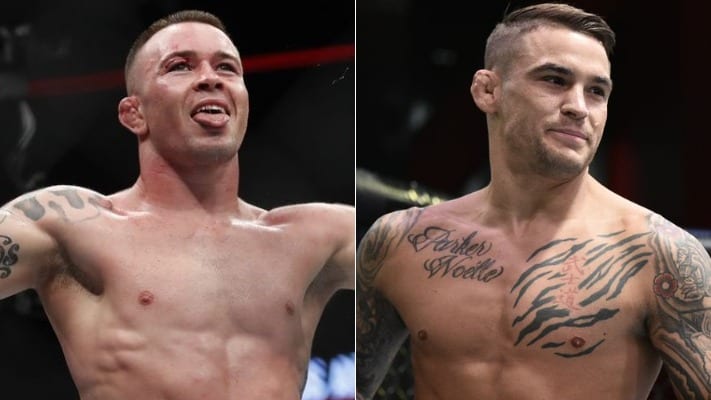 Colby Covington has called on his former teammate turned enemy, Dustin Poirier, to step up to welterweight and fight him.

Despite having a “personal rivalry” with Poirier, ‘Chaos’ backed him to emerge victorious from his trilogy fight with Conor McGregor at UFC 264.

Covington called the fight correct although Poirier’s win is somewhat tainted as he won by doctors stoppage when McGregor broke his tibia in the cage.

The former interim welterweight champion explained that he backed Poirier to win at UFC 264 because he is a naturally bigger man.

“People were giving me a lot of stuff this week. They were like, ‘Why are you picking on Dustin?’ Dude, Dustin weighs more than me,” Covington said during an interview with Fanatics View. “We used to weigh in at American Top Team all the time. The guy would weigh 188, 190. I’m like 185.

“I just don’t want to cut a bunch of weight because I know I’m the best in the world at the weight class that I fight in,” Covington added. “I don’t have to look for a weight advantage and cut all this weight to feel like I’m the bigger guy. So all the people saying ‘Stop picking on lightweights’ – I’m picking on a guy that’s bigger than me. It’s not my fault Dustin was saying to the media, ‘It’s on sight when I see Colby.’ But I’ve seen the guy 40 or 50 times since he said it’s on sight, so who’s the man of their word? Who’s not a man of their word?”

Covington hopes to settle his beef with Poirier inside the Octagon at welterweight.

“His best money opportunity if he wants to do good business is to come up to 170 and see daddy,” Covington said. “This is a personal rivalry. This isn’t like I’m trying to pick on someone and there’s no narrative to the fight. This guy, we go back 10 years training together and he said some things to me in the gym, I’ve said some things to him. There’s deep, deep, deep personal issues with this drama and this beef, and I just hope they get settled in the octagon some day. But if they don’t, then the fans get to know who daddy is.” (Transcribed by MMA Junkie)

Do you want to see Colby Covington vs. Dustin Poirier at 170lbs?