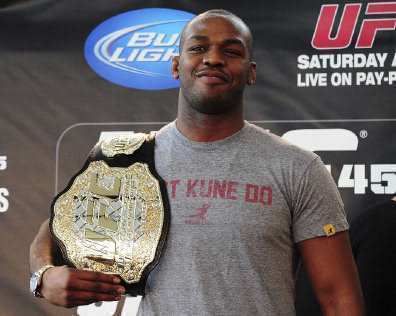 UFC light-heavyweight kingpin Jon Jones has had a pretty rough ride in the last couple of weeks. “Bones” was found to have cocaine in his system on a December 4th drug test, and is still currently in rehab for his problems. At a time when fans were starting to warm to Jones’ role as a heel, suddenly quite the opposite has happened.

The floodgates opened to some very negative media attention, and a fair amount of criticism was aimed at Jones. Some people even took the opportunity to really rub the drug test failure in the champ’s face. Luckily for the troubled champ, Dana White was sympathetic to his situation. Jones’ coach, Mike Winklejohn, tells Submission Radio that he is just happy the champ is getting help:

“Everybody’s made mistakes, and I’m not the one that….I mean I’ll give him a hard time when we talk about it next again, but we’re still standing behind Jon, and we like to have him around. He’s got a great heart, he treats his teammates well, he treats his coaches well, he treats the family well. It just it sucks that that happened. It’s sad to see him put himself in that position, but with that being said I think the future’s bright for Jon. He will learn from it and go forward”

So what about the reaction to Jones’ drug test failure? MW says that he is disappointed in the way certain people have criticized Jones so heavily:

“They’re doing it for the wrong reasons. I’m pissed off about it and not happy about it because it’s not good for Jon Jones long term life wise. He’s gotta be better for he himself, his family, and the people that look up to him. But a lot of people are down on Jon Jones ’cause they want to see the great ones fall; because they don’t feel good about themselves. So they have to see the winner lose, and that sucks for them, for those individuals that spend their whole day on the internet, telling everybody all of the bad things that Jon Jones did. I’m thinking to myself, get a life.”

It’s true that Jones has come under fire regarding this whole saga, but his image and the way he portrays himself seems to get him a lot of negative attention. Obviously, and primarily, his role as heel is used to promote his own PPV fights, but also it makes for lots of detractors.

The people that any real power in this situation, the NSAC (Nevada State Athletic Commission) and the UFC, aren’t pursuing any sort of punishment. So really, the damage is limited to Jones’ image, but won’t it simply add to his persona? You can argue that it is detrimental to the sport of MMA, but surely with the right treatment the champion will be back on track in no time.

Do you think Jon Jones was unfairly dragged through the dirt, or was it simply a reaction to years of his own doing?