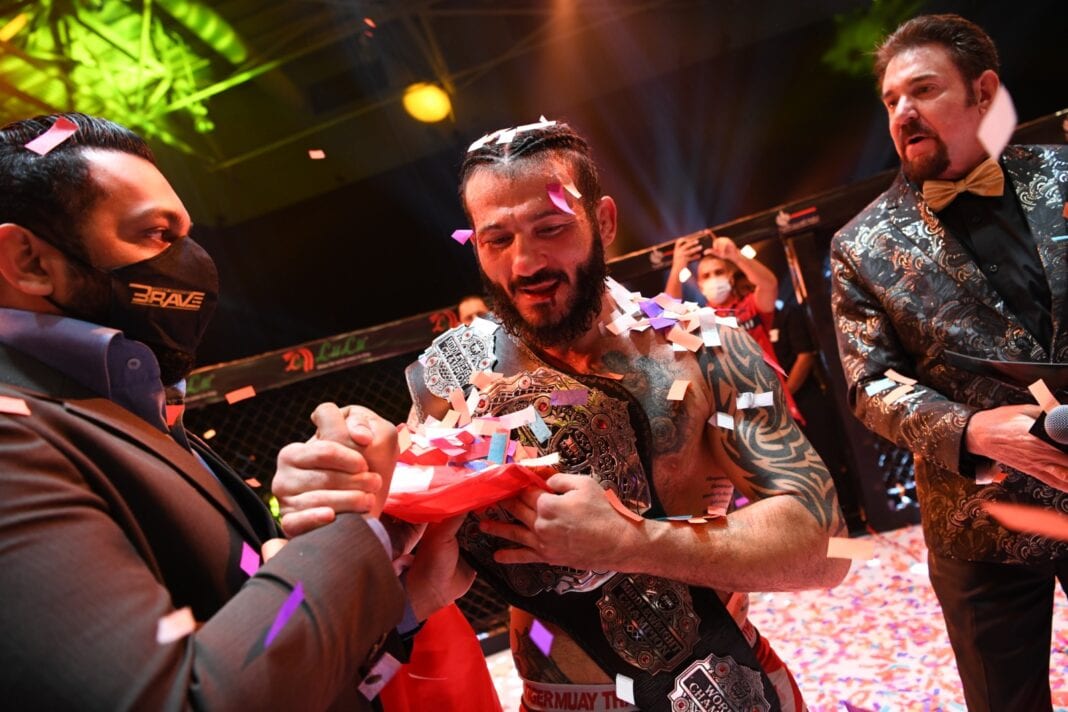 After having his house burn down, fights canceled, and battling injuries, Mohammad Fakhreddine finally has something to smile about in 2020. Today, the 36-year-old captured the BRAVE CF middleweight championship from Brazil’s championship Daniel’ Gaucho’ Pereira, with the Lebanese fighter sealing the deal via a fourth-round TKO stoppage.

From the outset, Fakhreddine pushed forward, looking to dictate the pace of the bout. Pereira tried but was unable to land the knockout punch he was after. By the end of the third, the Brazilian’s gas tank was running on empty and the right side of his face had taken heavy damage. Fakhreddine, sensing his moment poured on the pressure in the fourth. He dropped Pereira with a clean right to the head. He was then able to fire off a volley of strikes to his grounded opponent before the referee called a halt to the contest.

In the co-main event, Russia’s Ikram Aliskerov returned to the winner’s circle with a third-round submission victory over BRAVE debutant Denis Tiuliulin. Aliskerov controlled the middleweight contest from start to finish as he racked up his tenth career victory. The 27-year-old’s win puts him in pole position for a shot at Fakhreddine’s title.

Earlier in the evening, English lightweight Sam Patterson threw his name into title contention with an opening-round knockout of Brazil’s Felipe Silva. Patterson started slowly but exploded midway through the round when he landed a perfectly timed punch to Silva’s jaw. During his post-fight interview, he called out the current BRAVE CF lightweight champion Cleiton “Predator” Silva.

However, he may have a rival for that shot in Egypt’s Ahmed Amir, who overcame Ireland’s Cian Cowley via unanimous decision in a super lightweight contest. This loss was Cowley’s fourth straight defeat under the BRAVE CF banner. It will be interesting to see where he goes from here. After the fight, Amir also called out the ‘Predator,’ but it could be a three-way race between him, Patterson, and New Zealand’s John Brewin for the next lightweight title shot.