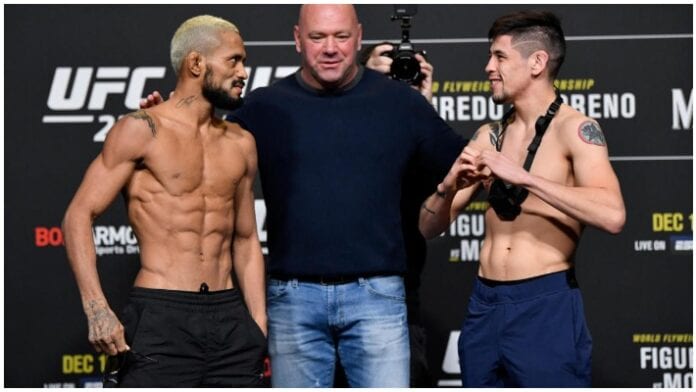 Brandon Moreno and Deiveson Figueiredo are set to fight for the third time.

The flyweight champion will make the first defence of his title when he squares off against the man he dethroned at UFC 269 on December 11.

“The trilogy is on. Brandon Moreno will defend his title against Deiveson Figueiredo at UFC 269 on Dec. 11,” Okamoto wrote on Twitter. “UFC looked into booking Moreno vs. Alexandre Pantoja, but Pantoja won’t be ready before end of the year. Moreno wanted to be active and was willing to fight any challenger.”

Moreno and Figueiredo put on an exciting, Fight of the Year candidate when they first squared off at UFC 256 in December 2020. The pair threw down for five rounds at the UFC Apex in Las Vegas before the judges scored the fight a majority draw and Figueiredo retained his 125lb strap.

Naturally, a rematch was quickly booked, and Moreno got his second shot at UFC gold on June 12. ‘The Assassin Baby’ left no doubt the second time around as he dominated Figueiredo from the first bell before tapping him out in round three to become the first Mexican-born fighter to ever win a UFC belt.

How do you think the Brandon Moreno vs. Deiveson Figueiredo trilogy fight will play out?