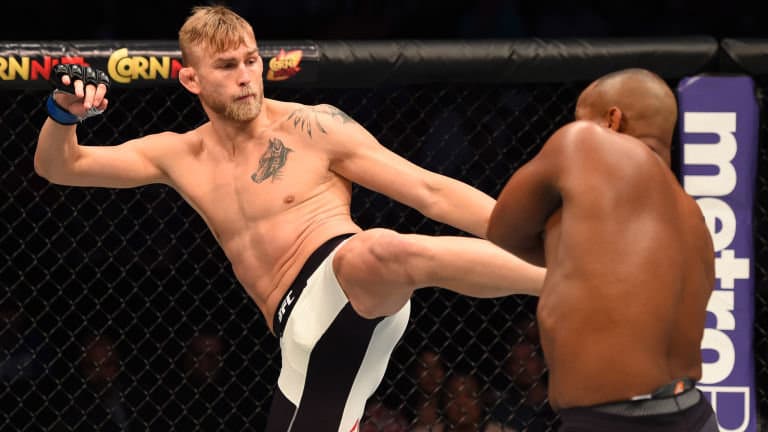 No. 1-ranked Alexander Gustafsson will headline UFC Fight Night 109 tomorrow (May 28, 2017) in a pivotal bout with No. 2-ranked Glover Teixeira in his hometown of Stockholm, Sweden. The UFC light heavyweight title will be on the line on July 29 when champion Daniel Cormier takes on bitter rival and ex-champion Jon Jones in a highly anticipated rematch.

With a win tomorrow, Gustafsson could earn himself a blockbuster title fight rematch, as he’s shared the Octagon with both Cormier and Jones, but right now he’s simply focused on Teixeira:

“It’s hard to say, man,” Gustafsson told MMAjunkie ahead of the FS1-televised headliner at Ericsson Globe in Stockholm. “I haven’t talked to Dana or the UFC about that. But if I get it, I’ll be more than happy. And I’ll take the fight, no question about it.

“But right now, for me, it’s just the monster over here. That’s my focus right now. (Teixeira) is a tough guy, a lot of experience. He can fight wherever; he doesn’t care if he’s in his hometown or on enemy territory. He still fights, and he comes to beat me, so I have to have all my attention, all my focus on Glover.”

No. 3-ranked Jimi Manuwa, who’s coming off of an impressive stoppage victory over Corey Anderson, is also in the running for a title shot. Gustafsson holds a win over “Poster Boy”, but the two actually train together now and Gustafsson would be happy to see Manuwa receive the next title shot:

“I think we have a great relationship today,” Gustafsson said. “We’re good friends. And I hope he gets it. If I get it, I know he will say the same. As long as we’re training together and keep developing our game, it’s not going to be any problem at all. Whoever gets it – I’m just happy if he gets it, he’s happy for me if I get it.”

Either way, “The Mauler” is focused on one thing and that’s beating Teixeira. The former title challenger said he plans to use his length, speed and footwork ‘to get the W’:

“This guy is a brutal puncher with good takedown,” Gustafsson said. “He doesn’t know what taking a step back is. He just comes forward. That’s what he does no matter what. He doesn’t have any head movements, nothing, he just comes like a train on you.

“I’ve got to be prepared for his power, but I know with my length and my speed and my footwork, I’m going to get the W.”

Who do you expect to come out on top tomorrow in Stockholm?