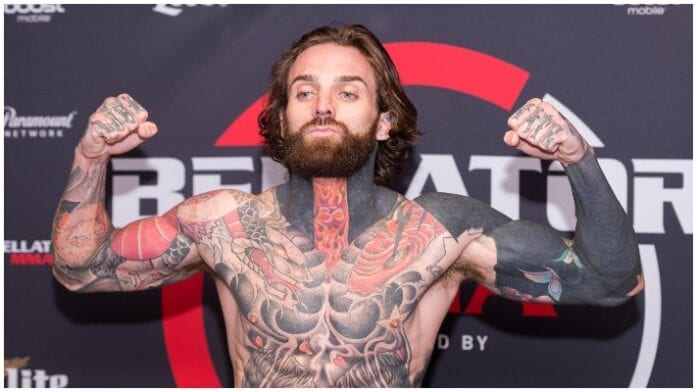 The 33-year-old of Geordie Shore fame shared a video to his social media on Thursday in which he celebrated six months sober, revealed he was done competing in MMA, and hinted at a new career in boxing.

“Today is a big day for me,” Chalmers said. “I am six months sober, six months in total, exactly half a year since my last week. I set out to do one month off the drink to sort myself out because I was sitting at nearly 90 kilos, drinking every day, and I said to myself that I need to change. So I said I would have one month off and now the plan is to have a whole year.”

“I’m at a new gym with amazing people around us, everyone’s got the same mindset,” Chalmers said. “We’ve left MMA behind. MMA is now a thing of the past. We’re on to a new challenge, a new target, a new goal, and I couldn’t be happier.

“Anxiety is non-existent. I don’t have the fear when you wake up after drinking beer, so it’s been—I wouldn’t even say it’s been a long six months, because it’s been pretty easy. I literally put my mind to it, I put my mind to it six months ago, I switched to a new gym four months ago, and that was the game-changer. Being around people who are superior athletes, is the only way to put them, has just put my mindset to just train, train, train and be healthy.”

“We’re putting MMA behind and focusing on a new goal,” Chalmers said. “So roll on the next six months and keep your eyes tuned because there’s gonna be some news coming, hopefully very soon.” (Transcribed by MMA Fighting)

Chalmers finishes his MMA career with a record of 5 wins and two defeats. The Englishman debuted in 2017 and quickly picked up four consecutive first-round finishes. He joined Bellator in 2018 and went 2-2 with the promotion. Most recently Chalmers lost via unanimous decision to Austin Clem at Bellator 240.

Did Aaron Chalmers impress you during his brief MMA career?