LowKickMMA.com
Home Boxing News Tyson Fury declares he will return to boxing in order to face... 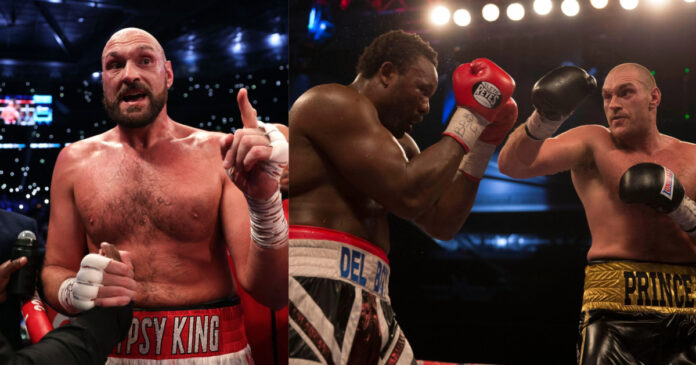 Ever since Tyson Fury announced his ‘retirement’, combat sports fans have been bombarded with videos and messages of ‘The Gypsy King’ calling out Francis Ngannou, Oleksandr Usyk, and even former Worlds Strongest Man, Hafþór Björnsson.

However, it now seems that Fury has turned his attention to one of his former opponents in Derek Chisora. In his latest video, he is stood with friend and former Commonwealth boxing champion, Isaac Lowe, who he would jokingly label his trainer for the potential Chisora fight.

“Well Andy [Lee],” Fury began “I’ve decided to come back to boxing because I can be the first heavyweight champion in history to have two trilogies. One with Deontay Wilder and a second one with Derek Chisora, I always said I’d fight Derek Chisora at the end of my career and here we are breaking all records again, setting precedents.

Fury and Chisora first squared off back in 2011, which at the time was a contest to decide who was the best up-and-coming heavyweight prospect from Britain. Fury would defeat ‘Delboy’ by unanimous decision, capturing the British and Commonwealth title.

The pair would meet again, just over three years later in November of 2014, this time Fury would bludgeon Chisora – Chisora’s corner would ultimately throw the towel during the 10th round. Just one fight following this, Fury would take on Wladamir Klitschko where he would produce arguably the best performance of his career.

Chisora has since responded to Fury’s callout for a trilogy bout. Check out his reaction below:

Who would you like to see Tyson Fury face in his return?