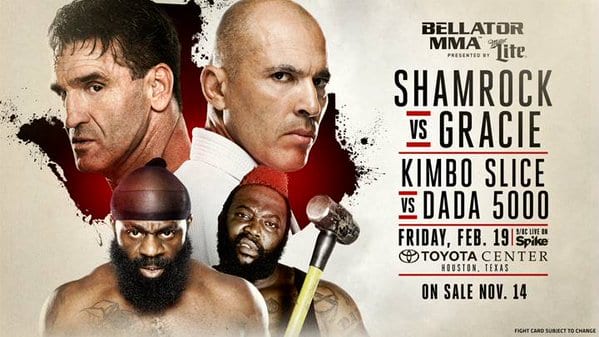 It was announced during tonight’s Bellator 145 event, which aired live on Spike TV from St Louis, MI, that Kimbo Slice will be fighting Dada 5000 and Royce Gracie will be fighting Ken Shamrock on February 19th in Houston, Texas at the Toyota Center.

Shamrock was knocked out by Kimbo Slice at Bellator 138 in the first round. Shamrock (29-15-2), is currently on a one-fight losing streak. In his last six bouts, he’s 3-3.  Shamrock would go on to say that he has future fight plans in the works.

Gracie is 14-2 in his pro MMA career and is coming off a win over Kazushi Sakuraba back in 2007.

Slice (5-2), is currently on a one-fight winning streak.