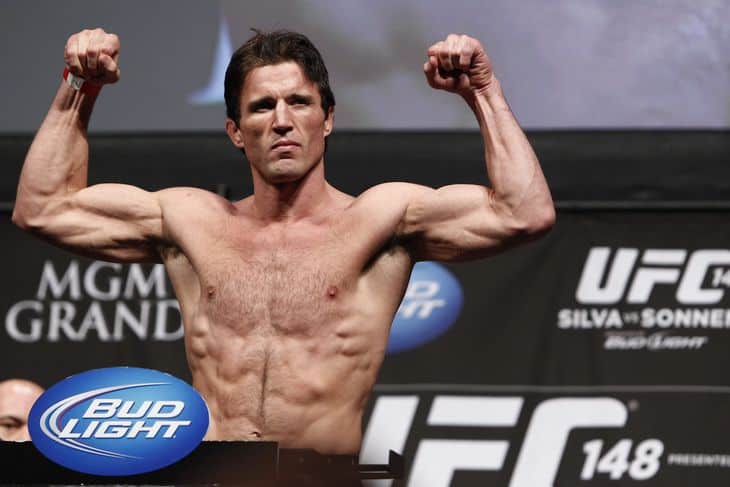 A certain gangster from Oregon may be considering a return to the Octagon.

Former multi-time UFC title challenger Chael Sonnen is a free man as of last week regarding the two year suspension he received from the Nevada State Athletic Commission after testing positive for multiple banned substances back in 2014. Speaking on today’s (July 25, 2016) edition of The MMA Hour, “The American Gangster” admitted that he once again has the ‘itch’ to fight again.

Sonnen didn’t necessarily commit to a return, however, saying that a few steps have to take place first, most notably saying that he must pass his drug test with USADA (United States Anti-Doping Agency), the UFC’s third party testing organization:

“I definitely have that itch,” Sonnen told Helwani. “I fantasize about it. But it’s one step at a time. I’m not holding back from you. I’m not acting like my return is some kind of breaking news. I’d tell it to you right now. But I have to pass this first test, quite frankly. It’s still out there. I’ve gotta pass it. If I pass that, I’ll pass all of them. But I have to know that everything is out. Boom, step one down.”

If he does indeed pass that drug test, the former title challenger would need to get in shape and attempt to return to his old form, a form in which he claimed he dominated the 185-pound division in:

In the end, however, the main road block appears to be the USADA test. Sonnen, who has never denied taking any PEDs, admits that he may have taken some banned substances in his time away which is why he wants to make sure he’s clean before a potential return backfires on him:

“I took a bunch of stuff that you can’t take and I want to make sure [it’s out],” Sonnen said. “I thought that made sense. Like yeah, I don’t want to jump in this thing if it’s just all gonna blow up in my face. [USADA] laughed like what I was saying was crazy. No, that’s exactly what happened.”

Would you like to see “The American Gangster” give it one more go inside the Octagon?