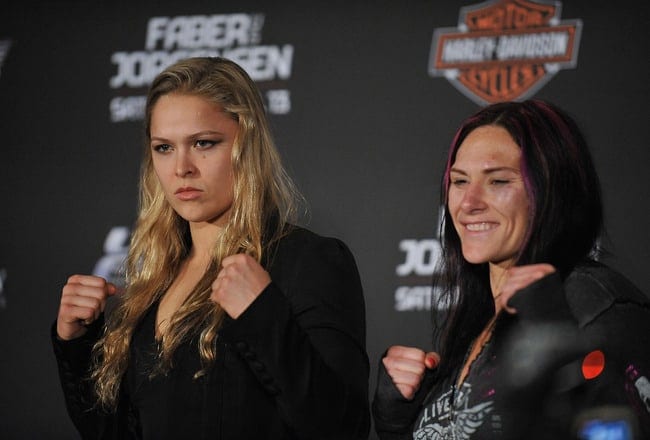 Rousey vs Zingano is certainly an interesting fight, but what does “Alpha” bring to the table?

Cat Zingano returned to action this past weekend at UFC 178 (Saturday Sept. 27th, 2014) and made a huge statement. After getting absolutely trashed for the entire first round, “Alpha” rallied back to get the third round TKO over Amanda Nunes. After more than a year out due to injuries, Zingano was awarded the next shot at bantamweight champion Ronda Rousey for her efforts.

Dana White confirmed that the promotion would target the fight for UFC 182 on January 3rd 2015, and former title challenger Miesha Tate gave her early prediction soon afterwards. As is always the case with champions as dominant as “Rowdy”, all contender seem to pale in comparison. So what does “Alpha” bring to the table for her shot at glory?

Firstly, Zingano is a finisher. What some previous contenders have lacked in is the killer instinct to finish a fight, something that “Alpha” has in great volume. Eight of her nine wins have come by way of submission or TKO, but the difference between Zingano and the champion is that she tends to come on strong in the later rounds. This trait is what some fans feel will be her downfall.

Nonetheless, Rousey will face a fight finisher when the two eventually meet, but “Alpha” needs to be the full package to even survive with the women’s bantamweight queen. The Olympic Judo veteran has the strongest grappling in the division without doubt, and her striking is coming on in leaps and bounds.

Zingano’s strong wrestling background, as a 4-time All-American, will be another strong point against Rousey, but Nunes showed that “Alpha” can be held down for a round. The question is would Rousey have let “Alpha” survive from the same position? All the same, Zingano has great strength, and her ragdolling of “Leoa” in rounds two and three showed just that.

Durability is probably the biggest advantage that Zingano can have in a fight with Rousey; I feel that the champion’s striking is no longer a weak point, as we saw against Alexis Davis, and Zingano’s best hope is to weather the storm of round one and hope she can grind “Rowdy” down for the rest of the fight.  That being said, the element of surprise could also be a very valuable weapon.

Perhaps the champion’s camp will be focusing their preparation on a slow start by “Alpha”, as we have grown accustom to in her recent showings. Maybe an early onslaught from the challenger could create problems for Rousey? All in all, and I hate to be negative, I don’t think Zingano stands much more of a chance than any of the champ’s recent challengers, but you can never count anyone out at this level.

What’s your pick for Rousey vs Zingano?