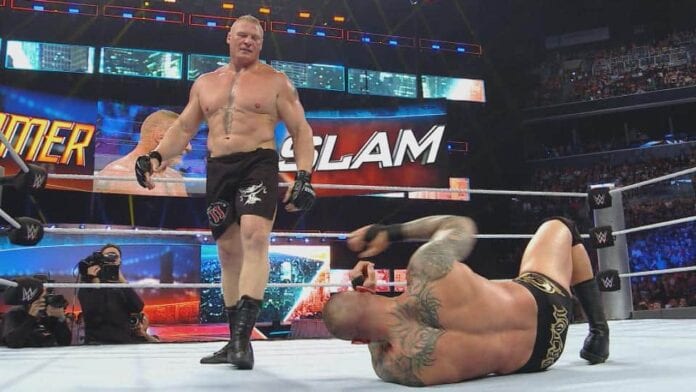 Former UFC heavyweight champion Brock Lesnar made his return to action after nearly five years away from the sport in the co-main event of July 9, 2016’s blockbuster UFC 200 from Las Vegas, Nevada, taking on top 10-ranked slugger Mark Hunt. Many had felt as if this was a dangerous challenge for Lesnar, but “The Beast” prevailed and took home a dominant decision victory. That victory was quickly plagued, however, as Lesnar was notified by USADA (United States Anti-Doping Agency) of a potential anti-doping violation.

Few details have been released regarding the test since, but Lesnar could be thrown back to the sidelines for two years if the situation doesn’t play out in his favor. With that being said, the former titleholder has decided to put his focus back on his professional wrestling career for the time being, although he did leave the door open for a potential return to the Octagon (Via TMZ):

“I’ve got a few challenges to overcome before I can get there. I don’t know. For right now, I’m gonna focus on my WWE career. I wanted to step back into the Octagon and avenge my loss against diverticulitis. Sunday (August 21, 2016) I’m facing Randy Orton at Summerslam and that’s really all that’s on my mind. To my fans that watch me in the Octagon, I thank them for their support. This has been a bumpy road. I’m gonna get through this alright. And there will be a day, maybe, that they’ll see me back in the Octagon.”

Lesnar holds a 6-3 professional MMA record which includes victories over Randy Couture, Shane Carwin, Frank Mir, and Hunt. Would you like to see the ex-heavyweight king once again return to the world’s largest mixed martial arts promotion?