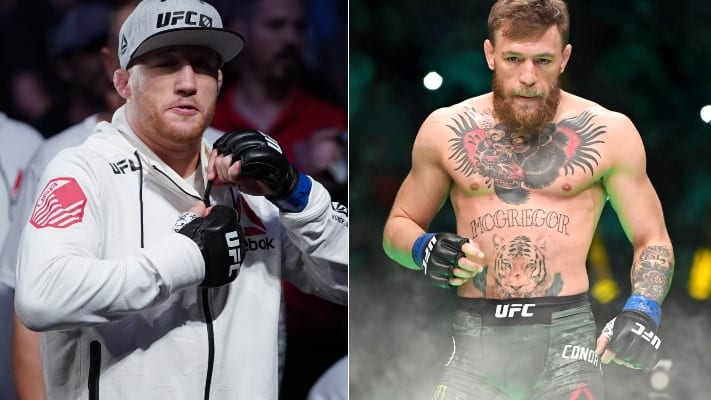 The UFC promotion yet again, rolls out it’s biggest media must-see events, that comes with the most interviews, the biggest fan interaction events and usually one the promotion biggest fights of the year for International Fight Week. Stats as collated and kindly supplied by UFC fan and self-confessed information fanatic Ojo Olayiwola’s gooner news, it’s the promotion annual early-July event that usually gets some of the biggest

With Jorge Masvidal taking on welterweight champion Kamaru Usman all but confirmed and Daniel Cormier openly admitting a third fight request versus Stipe Miocic in the summer, or perhaps probably hang his fighting gloves, followed by the rumoured Justin Gaethje and Conor McGregor fight that could happen in the summer as well, there comes one of the best options for the UFC to make the week memorable events.

That said, let’s take a look at the three fights which could be made for this upcoming July International Fight Week 2020 event.

Conor McGregor vs. Justin Gaethje – this is a fight wherein the Irishman’s supporter and foes want him to take in the summer. As per the gooner news stats mentioned above, Conor McGregor’s supporters want him back into the octagon against Justin Gaethje simply because of a win against the American fighter would propel their champion back into the UFC title picture. McGregor’s foes on the other hand, however, sees his 31-year-old opponent as the ideal fighter just as violent, someone just as lethal and someone just as stone-cold resilient as the ultimate stopper to McGregor. That being said, Justin Gaethje v Conor McGregor would put on a monster of a show coming this summer.

Many of the UFC light heavyweights division supporters believes deserve to get a fight against Miocic, but Dana White is giving the fight to Daniel Cormier one last time and one last fight before his retirement. Funny as it sounds. Cormier made mentioned of retirement last year after one more fight, and here we are again. Same story, same dance. In the last bout, Cormier was winning that second fight with Miocic for the record, but his pride got in his way and instead of trying to wrestle Miocic. He decided to outstrike him which turned out to be a very bad idea for him and he returns, Miocic went Paul Bunyan on Cormier and chopped him down with a furious focus of fists to Cormier’s face and body. Stipe Miocic vs. Daniel Cormier for the third time is anyone’s guess depending on how Cormier opts to fight it.

Some numbers of UFC light heavyweight division supporters see Dominick Reyes cheated as to who the king of the light heavyweight division title should be given to. Reyes won the first three rounds of his bout against Jon Jones and did more injury on his opponent throughout the fourth round of the fight. However, Jones got a handful of takedowns but did next to no damage to Reyes while doing so. A rematch between these two fighters should garner headlines in the summer should it come to pass. And if not that, Reyes should be given another shot against Jon Jones to prove that he can beat him in a city that knows how to judge fights.